The theme for photography competition in 2019 was Capturing movement. The Society would like to congratulate the winners and shortlisted photographers, who were celebrated at the Biology Week annual awards ceremony.

Images from the competition were covered in a number of news outlets including BBC News, The Guardian and The Times.

Winner: Photographer of the Year 2019 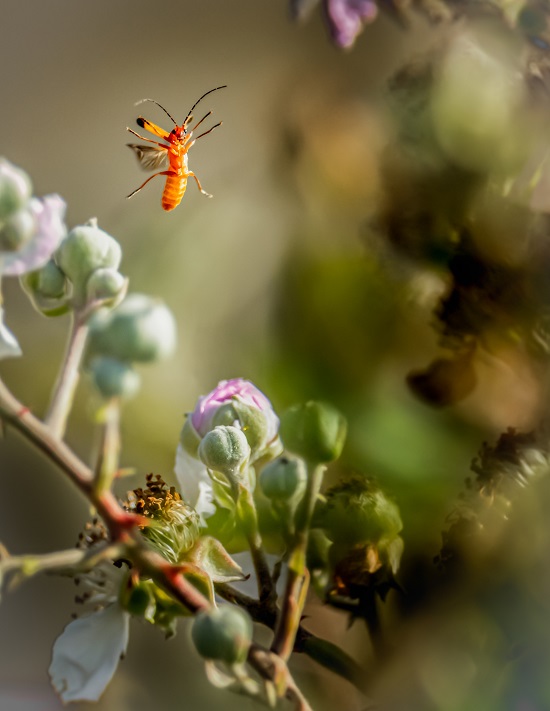 Runner up: Photographer of the Year 2019 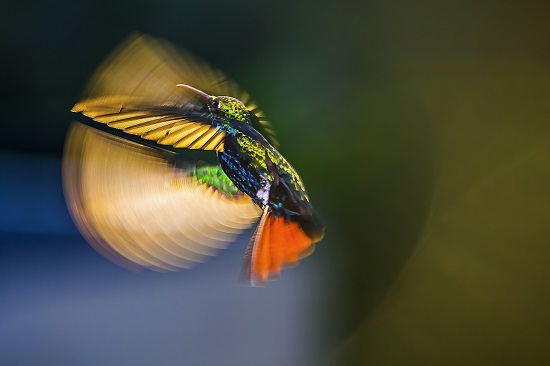 Flying over sunshine by Kristhian Castro

This photo captures the stunning greens, blues and oranges of this hummingbird Anthracothorax nigricollis as it flies during sunset. Members of this family of birds (Trochilidae) can flap their wings up to 75 times per second. At faster shutter speeds (1/200sec) the wings appear static, so Kristhian used the setting sun as a backdrop to capture its movement.

Highly commended: Photographer of the Year 2019 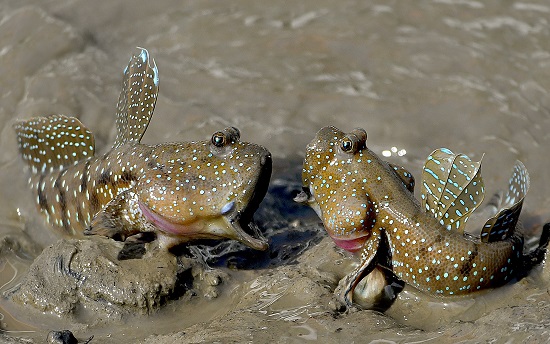 These mudskippers are highly territorial and usually chase away intruders. Mudskippers are amphibious fish, meaning they can leave the water for extended periods of time, and mudskippers in particular are able to survive in air for multiple days. They breathe through the moist lining of their mouth and throat, so they prefer high humidity, and are often found in muddy mangrove swamps.

Winner: Young Photographer of the Year 2019 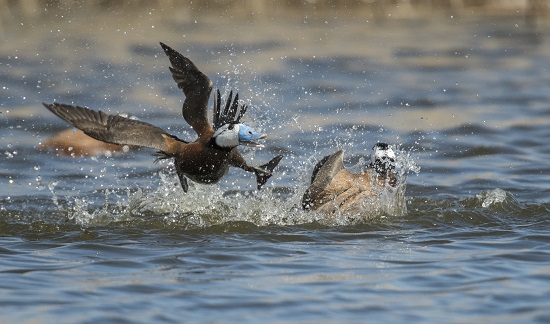 This amazing photo, taken by Carlos Perez Naval in Spain, is of two white-headed ducks, fighting over something in the water (probably a fish!).

Runner up: Young Photographer of the Year 2019 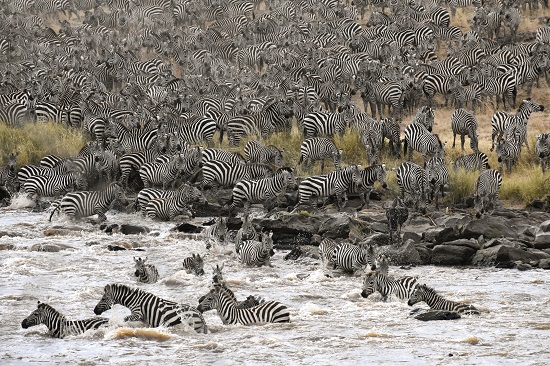 The stampede by Lillian Quinn

Lillian Quinn has snapped a stampede of a large herd of zebras crossing the Maasai Mara National Reserve, Kenya. The zebras, hoping to dodge crocodiles as they head to the other side of the river, make the journey once a year. 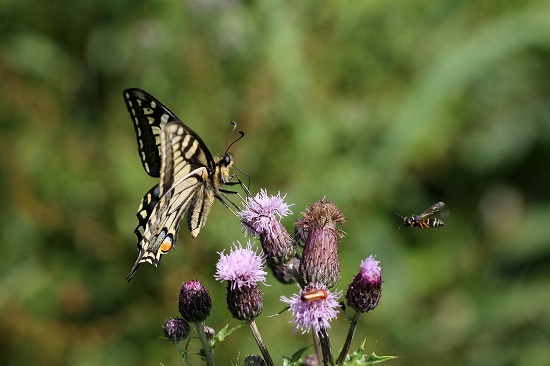 Hectic nature by Will Lawson

This image highlights the beautiful striped pattern of the zebra, showing both the real animal and its rippled striped reflection. This particular zebra is a Gravy's zebra, the most threatened of the three species of zebra. It is characterised by thinner stripes than the other species. This photo therefore shows stripes not only as a means of camouflage for the animal but also as a mechanism of identification for the observer.

Shortlist: Photographer of the Year 2019 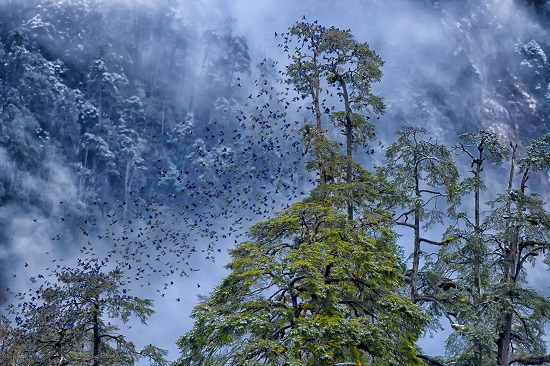 This photo captures the near symmetrical flight of a large flock of more than 200 Grandala birds. Capturing these birds on film can be quite the challenge, as they remain at very high altitude in Himalayan terrain for almost eight months of the year. The birds will descend to 8000ft only when the upper areas are completely covered in snow and food becomes scarce. 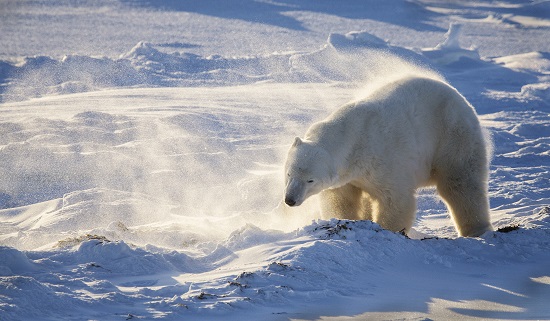 This stunning photo is of a polar bear shaking off snow as it walks through the Hudson Bay, Canada. For two hours before the photo was taken, a blizzard had completely covered the surrounding area and the polar bear in snow. Ian waited until the weather calmed to capture the bear standing up and shaking the snow from its fur, ready to continue with its journey to the sea to hunt for seals. 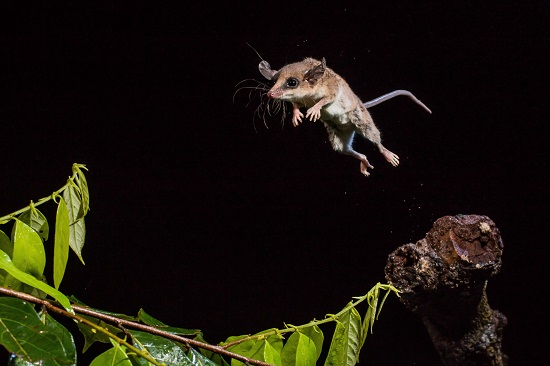 This stunning photograph is of an unidentified South American marsupial, although the characteristic black markings on its face indicates it might be a mouse opossum. These small creatures are nocturnal, and feed on bugs, fruit, and bird eggs.

Shortlist: Young Photographer of the Year 2019 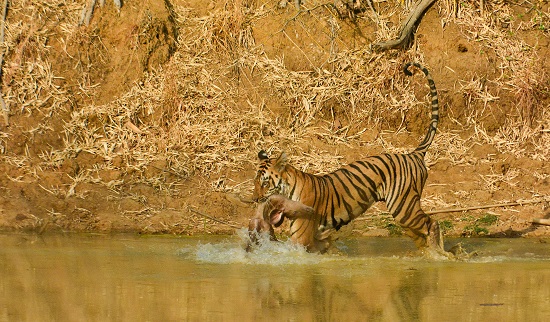 This stunning photo of a tiger after a successful hunt was taken by Amogh Gaikwad. After capturing its dinner, this 15-month old tiger cub decides to play with its dead prey.