Currently in its fifth year, the grant scheme has funded over 100 events to take place across the UK and internationally. Upcoming events are on our events pages and here is a taster of some past events:

The World of Biology and Female Role Models

University of Wolverhampton academics delivered ‘The World of Biology and Female Role Models’ outreach event to celebrate Biology Week and the International Day of the Girl in Black History month. Dr Petula Nurse, head of STEM outreach & community engagement and principal lecturer in biomedical science in the Faculty of Science and Engineering (FSE) hosted the STEM event to children from local schools in Birmingham and the Black Country.

Petula teamed up with academics and STEM ambassadors to raise awareness of 225 primary school children visiting the University of Wolverhampton. In an interactive Q&A session, female role models all at different stages of their career including the gave an insight into their STEM journey. Pupils were also treated to the film ‘Hidden Figures’ about African-American women hired by NASA to be part of America’s space program in the 1960s.

The Year 5 and 6 pupils said: ‘if you put in a lot of hard work you can do anything’; ‘I learnt to follow my dreams’; ‘…Always be respectful to others’; ‘…it doesn’t matter who you are, you can do anything’. All children participating received a take home activity as part of the Black Country Children’s University initiative so they could continue this discussion at home with their family members.

Discovering Biology on our Doorstep at ECOFEST

All too often things that are under our noses are things we over look and under appreciate. With glorious sunshine on a dry October day and an aim to encourage adults and children to investigate and appreciate the biology around them ECOFEST activities started in full swing.
Engaging and accessible activities were planned that used the local environment of Lower Peover primary school in Cheshire to tell a story of fun, interest and amazement (the top three adjectives from event feedback) about the biology on our doorstep. A birds of prey flying display provided the wow factor and drew the crowds. We were treated to acrobatic flying of harrier hawks and the almost silent whoosh for the barn owl flying overhead with captivating discussion of the importance of these top predators. 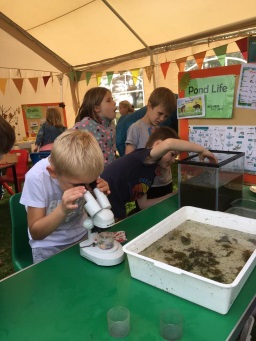 were enthralled by investigating pond invertebrates, looking through dissecting microscopes into new watery world of aquatic mini-beasts. Cheshire Wildlife Trust provided expertise and resources with a dragonfly craft activity that entertained many a child and adult alike with discussions of the number of legs and wings. Comments and suggestions were made for a pond restoration plan, making families aware of an old disused pond on school grounds. We gathered local knowledge and interest in helping to restore the pond and create a community outdoor learning space. What a great step forward gathering thoughts and commitments to reach a common goal.

The tree identification competition helped develop skills in the use of keys and botanical terms for all ages and those who were drawn from the prize draw were thrilled to win identification guides for their class. Earthworm anatomy was a hot topic in the playground the following week with discussions of ‘when is a worm an adult worm?’, eagerly answered by those who had carried out the worm survey or composting chaos activities.

The programme was organised by the Faculty of Biosciences and Medical Engineering undergraduate students and academic staff. It aimed to increase the interest of primary school students and their parents.
There were lots of activities during the day, including a talk by Dr Saleha Shahar entitled, ‘Biology  change my life’, a colouring competition for years one and two and a biology themed painting competition for years three and four. Additionally games like ‘Explorace’, a number of challenges and puzzles, was organised for years five and six. Academic staff from the university produced an exhibition showcasing their expertise in biology. 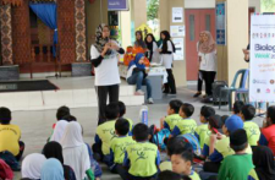 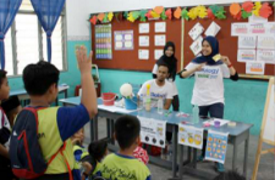 This year, for the first time ever, the Nottingham STEM Outreach society brought cutting edge research out of the lab and into the pub with support from RSB. Vinyl shop and gig venue Rough Trade hosted three evenings of talks, as visitors explored the hidden planet, unveiled the future of food and learned how to save the people of Earth.

Anyone expecting an evening of mainstream academic lectures, however, would have been sorely disappointed. With a live bee hive auction (including bees!) and a chance to interrogate real life scientists, the audience left the event with more than just a working knowledge of current research. 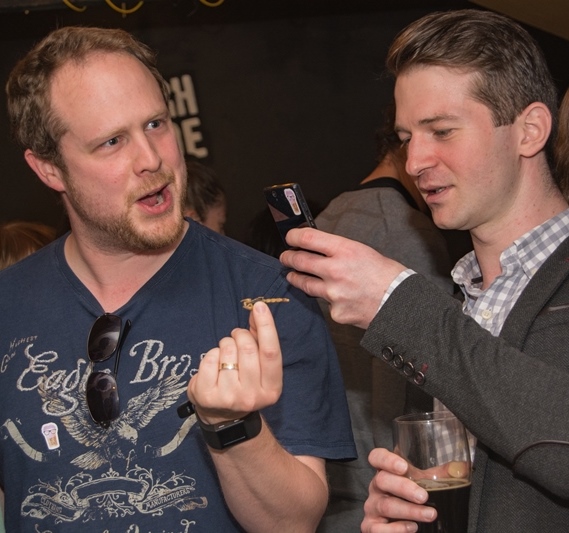 Then visitors got rather more than they bargained for: discussions on empathy with stressed tomatoes (Dr Matevz Rupar), reconsidering biodiversity (Dr Tom Reader) and the future of insect burgers (Professor Andy Salter) were followed by an edible insect supper (but not before everyone had a chance to take a closer look at them under our mobile phone microscopes, obviously).
While everyone learned something new about current research and what a real life biologist looks like, a few lucky people also left with prizes and a shiny new (temporary) science tattoo.

The overall success of the event left organisers and attendees overwhelmed with joy, and we look forward to next year.

Earlier this year, Dr Rhys Grant and colleagues from the Departments of Genetics and Pharmacology at the University of Cambridge joined forces to run a hands-on exhibit at the Cambridge Science Festival, to educate members of the public on the importance of green fluorescent protein (GFP) and fluorescence microscopy to life sciences research.

Over the course of a weekend, two  thousand visitors were posed the question of how biologists investigate the internal workings of cells when they are too small to dissect and view by eye. Exhibit attendees were introduced to the concept of fluorescence by illuminating household materials, such as tonic water and washing up liquid, with ultra-violet light.

To much amazement and glee, they were then shown genetic engineering in action through viewing living, “glow-in-the-dark” (GFP-expressing) plants, microorganisms and flies to demonstrate the power of fluorescence as a biological technique. With their newfound knowledge, visitors took on the role of a researcher as they prepared their own microscope slides to look for fluorescence and study organelles in live yeast cells, whilst some of the younger guests channelled their inner van Gogh to produce fluorescent artwork. 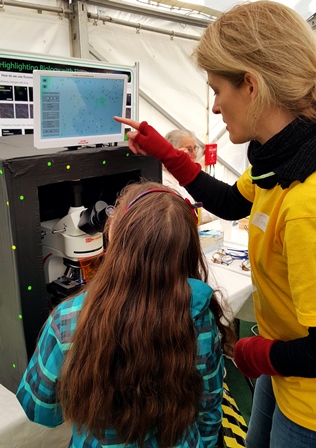 The exhibit was rounded off with a poster presentation of current research methods in Dr Catherine Lindon’s laboratory (Dept Pharmacology, University of Cambridge @LindonLab) to demonstrate the essential nature of fluorescence microscopy in improving our understanding of cancer cell biology and cell division.

Feedback from the event was overwhelmingly positive with many praising the visual demonstration of genetic engineering and the opportunity it gave youngsters (and indeed people of all ages!) to take part in a scientific practical. Special thanks are necessary to the volunteers from Genetics and Pharmacology who gave up their weekend, the Society for funding the exhibit, and GT Vision who kindly loaned us a fluorescence microscope.

A spoonful of soil: the story of antibiotics

The Museum of Science and Industry in Manchester hosts monthly ‘platforms for investigation’ (Pi), where they offer space for teams of researchers to engage with visitors. Our team comprised staff and students from Manchester Metropolitan University, with colleagues from UEA Norwich. Our aim was to raise awareness of the value of antibiotics against the emergence of antimicrobial resistance.

We devised a range of activities that encouraged participation but also enabled us to measure engagement. Our first ‘lure’ was a diagram of a person: we asked whether our visitors had ever taken antibiotics, for what infection, and whether they had worked. After that, we talked about what antibiotics were, what they were used against (not viruses!), and where they came from – the soil. 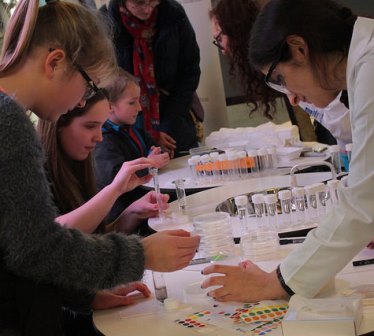 The most popular part of the event was the practical exercise, involving weighing, suspending and then plating out soil suspensions onto agar plates, for incubation back in our labs. Visitors looked at images of likely results, and played computer games, that revealed what happened when microorganisms became resistant.

Finally, we collected sticker cards – six stickers showed that all stations had been visited – for entry in a prize draw to win a lab coat.

We had 214 visitors, families and groups of adults. Over 200 separate ‘infections’ were indicated on our sick person, particularly around the throat. Over 70 agar plates were inoculated, although no-one came to see their results in person at the university the following Saturday…

Feedback on the sticker cards was entirely positive – “fun”, “interesting”, “helpful”, “informative”, “awesome”. We were all pleased but exhausted as we headed home. Thank you to the Society for helping us to make the event a success. We are also reporting on the activity in a poster at the American Society for Microbiology 2016 congress. 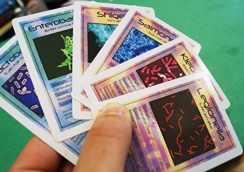 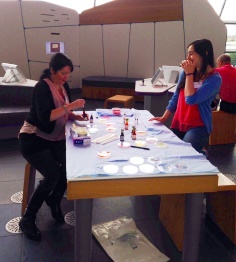