This morning the Home Office released the Annual Statistics of Scientific Procedures on Living Animals in Great Britain, providing information about scientific procedures performed using living animals during the year 2014, as regulated by the Animals (Scientific Procedures) Act 1986.

This morning the Home Office released the Annual Statistics of Scientific Procedures on Living Animals in Great Britain, providing information about scientific procedures performed using living animals during the year 2014, as regulated by the Animals (Scientific Procedures) Act 1986.

This is the first time that the collection of statistics has taken place following the transposition of European Directive 2010/63/EU into UK law through amendment regulations to the Animals (Scientific Procedures) Act 1986, and the collection has undergone some changes as a result.

In particular, information is now collected on procedures completed, not on procedures started, which means that the assessment reflects actual outcomes rather than planned or expected outcomes as previously. This has enabled the incorporation of a recommendation from the science community (Laboratory Animal Science Association 2008) that details the actual severity of procedures to be collected, therefore this is also happening for the first time.

In 2014, a total of 3.87 million procedures were completed. Of these, 1.94 million (50%) related to the creation/breeding of genetically altered animals that were not used in further procedures and the remaining 1.93 million (50%) were experimental procedures.

Comparisons to previous years need to be carefully considered for accuracy and implication, given the discontinuity of the collection, as explained above.

Overall these numbers can be taken as an indication of a genuine stabilisation or decline in total procedures in line with the principles of Replacement, Reduction and Refinement of experiments using animals (often referred to as the 3Rs).

The five categories of severity included and assessed in the UK 2014 statistics, with percentages given of experimental procedures, are:

‘Mild’ procedures include blood tests and MRI scans and ‘severe’ procedures include long-term diseases where assistance with normal activities is required, as well as animals found dead without sufficient information to decide that they did not suffer severely.

Again this gives new insight and shows where concentration to reduce and refine the impact of experimental procedures could help to reduce the overall impact significantly. The science community has shown interest and capacity towards the 3Rs and continue to work with others to promote them. 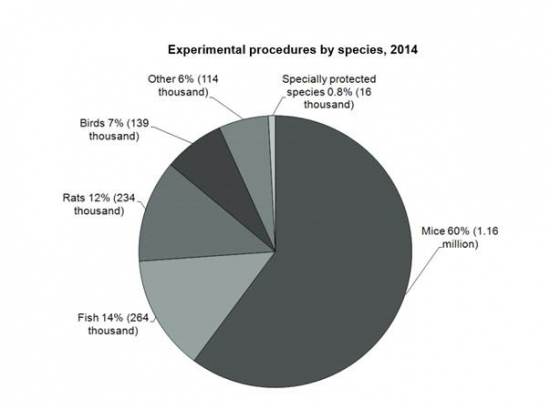 Information on free-feeding larval forms (e.g. tadpoles) is now collected. This has resulted in a large increase in the number of procedures involving amphibians.

Professor Dominic Wells FRSB, chair of the Animal Sciences Group, Royal Society of Biology said:
“The changes in the data collected for the annual statistics, championed by the scientific community, allows greater public information by reporting for the first time the severity experienced by individual animals involved in experiments. The statistics show that the majority of the animals undergo very little pain, suffering or distress (sub-threshold, mild and non-recovery, 67%). This format of reporting will also promote further work on the Replacement, Reduction and Refinement of experiments using animals.”

The Animal Science Group (ASG) is a Special Interest Group of the Royal Society of Biology, representing the broad spectrum of UK bodies actively involved in supporting, formulating policy or directly involved in research involving animals. ASG currently has 30 member and 7 observer organisations.

The Royal Society of Biology (RSB) supports the use of animals in research when properly regulated and when no alternatives are available. The RSB actively support progress towards a reduction in the use of animals by refining experiments and developing new ways to minimise the use of and replace animals wherever possible.