Last month images flashed round the world from a dig in Patagonia, Argentina, where the remarkably complete remains of an enormous new dinosaur had been discovered. Thought to be at least 40 metres long and weigh 77 tonnes, the colossus is larger than the previous biggest dinosaur found, the giant herbivore Argentinosaurus.

Dr Diego Pol was one of the first palaeontologists on the scene, alongside colleagues from Argentina's Egidio Feruglio Museum of Paleontology. A photo showing Pol lying next to a super-sized femur quickly spread as the 90 million year-old creature's sheer size captured the world's attention.

How were the remains discovered and did you have any idea it was such a significant site?

It was just a few pieces of bone on the surface at first, found by local farmers. When we first went there it was interesting, but we visit hundreds of sites like this. It was only after about five days of excavating that we realised how big and how good the preservation was.

What exactly was found at the site?

There are seven specimens of a giant dinosaur - we know this from repetition of certain elements. We have a complete forelimb and scapula, and a complete hindlimb with pelvis, so we can reconstruct a lot from that. Plus there are vertebrae from the neck and tail. It's unusual to have such complete remains, but especially when you're talking about really giant dinosaurs. Most of what we know so far has been based on one, two, maybe five bones found at a particular site. 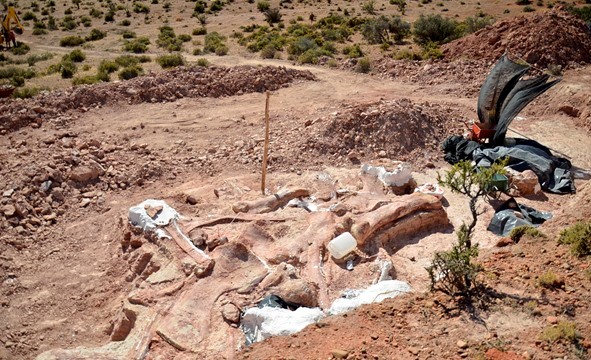 A view of the dig site showing the dinosaurs' huge limb bones, pubis and vertebrae breaking the surface

How did you estimate the size and weight of the species from the skeletal remains?

In the last twenty years there has been a lot of research to try and find which skeletal measures correlate with body mass. Recent work by Campioni and Evans (2012) analysed 100s of animals - quadrupedal and bipedal - and came up with a series of equations based on size of the femur and humerus. There are several approaches to estimate body size and this was the most recent and sophisticated. When you have very large outliers, at the very extreme of size, it may not correlate as well, of course. It's what I find possibly the most interesting of all, not the fact that it's the biggest by a tonne or whatever, but the fact that we can start to answer lots of questions about size.

The world's largest ever terrestrial animals

The specimens found on farmland in the Patagonia region of Argentina are believed to be 90 million years old.
Estimated at 44 metres long and weighing 80 tonnes, the new species is larger than Argentinosaurus, the previous largest contender.

The sauropods were herbivorous dinosaurs with long necks, long tails, relatively small heads and thick legs, and include the largest animals to have ever lived on land – the only animals that outweigh the creatures are the largest whales.

They are estimated to have lived from the Triassic to the late Cretaceous period (200–65 million years ago) and include the well known brachiosaurus and diplodocus.

Many of the largest sauropods' size is estimated from just a few bone fragments, and even larger species have been proposed – one up to 60 metres long – although based on spurious or missing evidence.

How, and why, could a land animal get so big?

We don't know exactly - why at this time in the history of the Earth you have these huge herbivores, and you also have these huge carnivores too. It's a special moment in history when you seem to have scaled up versions of animals that existed before and after them. It could be down to a number of factors: co-evolution between the herbivores and carnivores, or climatic reasons.

What about more left-field theories, such as that large dinosaurs were semi-aquatic?

I can't believe that as these specimens are nearly always found in semi-arid, typically continental locations, not at the bottom of ancient lakes.

Do you know how the specimens may have died?

It's really interesting because they all died here together - the remains were not all transported by a river or rock movement into the same place. You can't really test for the cause of death, but if these are animals that lived in herds, it's not unusual for herds of animals to die together, for example when there is a drought or a catastrophic event like a volcanic explosion. 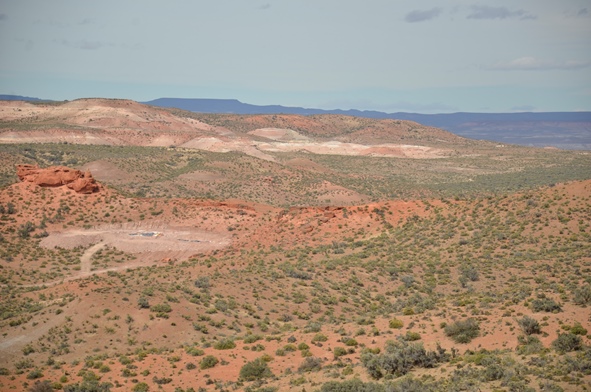 Do you think this must be the upper limit in terms of size, or could future discoveries be even bigger still?

These guys are pushing the limits of what we thought was possible in terms of the maximum size an animal could be. But certainly the possibility is still open, we just need to keep working to see if we can find something bigger.

When you become huge you face all sorts of challenges. You have to fight against gravity just to move, to stand up. You have to get blood from your body to your head down to your tail, as far as we know with just one heart. And really big animals also have problems with heat dissipation.

Have you come up with a name yet?

We will name the species when we publish the formal description of the taxon in a scientific journal. We are discussing the species name, but surely will make reference to its body size...

Dr Diego Pol is an investigator and researcher at the Museum of Paleontology Egidio Feruglio in Trelew, Patagonia.