Hunting the Hunters: At War with the Whalers 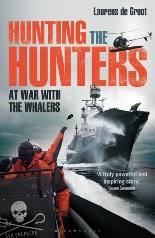 With the extensive news coverage of the activities and arrests of the Greenpeace Arctic 30 in 2013, Hunting the Hunters must certainly be a timely publication for anyone wanting to find out more about the life of an activist. Set at the opposite end of the planet in the freezing waters of the Southern Ocean, de Groot begins by explaining why he gave up a successful career as a detective in the Dutch police to become a serious activist with the charity Sea Shepherd.

As Japanese whaling boats harpoon minke whales, de Groot and his fellow campaigners risk their lives attempting to thwart their efforts. Their techniques, such as deploying prop foulers and launching cans of butyric acid, are described with realism and passion and dramatic events unfurl throughout.

Having never really thought about what happens between whalers and anti-whalers, I now have a deep respect for the people who put their lives on the line for a cause that they are passionate about and which many of us would agree with. From the first sentence, you are transported into a world that most of us will never experience.

The style of writing is easy to read and draws the reader in. Although I am not a huge fan of autobiographies, I thoroughly enjoyed reading de Groot's story and would recommend it to anyone interested in conservation, if only to understand the role of the activist in the fight against the hunters.