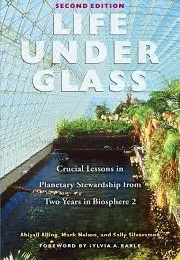 Life Under Glass is the story of eight scientists referred to collectively as Mission One crew who on the 26th September, 1991 entered Biosphere 2 a sealed man-made planet resembling Earth. Here they began one of the most exciting, innovative and crucially important projects ever conceived in recent times, giving in depth data on the biological and physical interactions of endemic species populating man-made ecosystems, often built from scratch, ranging from rainforests to oceans.

I admire the courage, tenacity and resilience of the eight “crew” in locking themselves away in a closed “planet” in order to explore self-sufficiency, sustainability and re-utilisation of limited resources over a two year period. The account given describes in minutiae the day-to-day schedule of physically hard demanding work that was needed to till the soil, cultivate crops and run scientific experiments in parallel. Alongside the overhanging threat that the crops may fail; changing atmospheric conditions, essential for life, may result in the accumulation of toxic gases threatening both the lives of the organisms inhabiting the individual ecosystems and the crew themselves and ultimately jeopardising the project.

Perhaps unsurprisingly upon leaving Biosphere 2 the crew had to readjust to the daily demands of the real world. During their internment time dilated as space was condensed due to the degree of integration of life and technology resulting in accelerated natural cycles relative to the outside world. Physiological changes were noticeable upon exit resulting from the consumption of non polluted foods and water, busy daily schedules combining hard physical exertion with mentally demanding monitoring and measuring activities. Psychologically and philosophically they experienced a deepening spiritual connection at both the molecular and holistic levels whilst simultaneously contemplating their role in their brave new world.

The lessons and insights gained by the participants as reported in this book are too important to be ignored as future climatic changes lead to unprecedented environmental pressures requiring novel innovative technologies to solve them if life on Earth is to survive.