Saving the Dammed: Why We Need Beaver-Modified Ecosystems 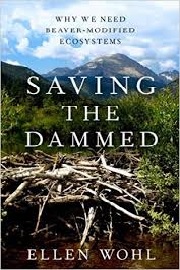 As with many other species, the previous abundance of beavers in North America and Europe is staggering when set in sober contrast with their scarcity today. Ellen Wohl tells this sad story by focusing on a beaver meadow in Colorado, visiting each month for a year and describing the seasonal cycle of a colony and the surrounding wetland in lush detail, while gradually stepping back to make the case for beaver-directed ecosystems. And make the case she does, convincingly demonstrating how ‘nature’s engineers’ produce environments more conducive to carbon and nitrogen storage, higher fish numbers, improved flow moderation and significantly more biodiversity than those produced even by other wild species such as grazing elk (let alone a river environment tailored to the narrow needs of humans).

Successful wetlands require beavers to act as linchpins, but although this has been recognised repeatedly since the 19th century (and promptly forgotten), it has not stopped us hunting them for sport or hats or removing them from the land as pests. Even our humane attempts at resettlement have until very recently suffered from extremely high attrition rates.

Saving the Dammed is a depressing reminder of both the fundamental connectedness of things and the abject disconnect of the human mindset. Ultimately, however, Wohl does not adequately address the mismatch of needs that created this mess in the first place. All the reasons why rivers are narrow and fast where once they were wide and tranquil – agriculture, housing, transport, trade – are not explored in enough detail to make this a truly holistic examination of the problem and solution that is the beaver.