The DNA Detectives (The Smugglers Daughter & To Catch a Thief) 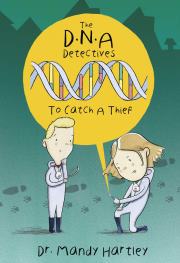 Writing an engaging and accessible science-based fiction book for 7 to 12 year-olds is considerably harder than writing a scientific paper. Not only are you competing with the lure of television and video games (also a problem for easily distracted professional scientists!) but the science needs to be explained from first principles in a language that is easy to understand and does not interfere with the plot.

Impressively, this is exactly what Mandy Hartley does in the first two books of what is set to become a classic series of children´s adventure stories. She sensibly keeps the science secondary to moving the narrative forward at a pace that would appeal to the most fidgety pre-teen. Moreover, when the science is introduced it is neither dumbed down nor overly didactic – an impressive juggling act that clearly showcases her experience as both an experienced geneticist and mum.

Both books are written in the style redolent of the classic children´s stories of Enid Blyton and have an old-fashioned ‘feel’ despite the very contemporary genetic techniques that are showcased. In the first book in the series, The DNA Detectives: To Catch A Thief, the protagonists of the series, Annabelle and Harry, use their mum´s garden-based DNA laboratory find out who stole the family pet.

The second book The DNA Detectives: The Smuggler’s Daughter moves the story to Cornwall, where the children become involved in a historical mystery after finding an antique locket in a rockpool. The science is introduced a lot later in the second book, but again has a pivotal role in solving the mystery.

Both books use judiciously chosen line drawings to illustrate the genetic evidence, which both help the explanation in the text and provide excellent opportunities for further discussion. The books are also supported by a website full of additional child-friendly resources on DNA, cells and forensic science to accompany each story.

In summary, these are ideal books to engage your children in the fascinating world of genetic science. I look forward to seeing the next instalments almost as much as my daughters do.