The Spirit of Inquiry: How One Extraordinary Society Shaped Modern Science 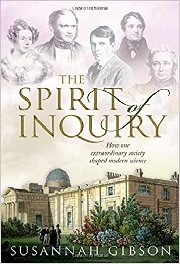 Reviewing a great book is much like witnessing a blue moon, infrequent but captivating. For me, The Spirit of Inquiry was one such event.

This details the history of the Cambridge Philosophical Society from its inception in 1819 to the present day. It was founded by Adam Sedgwick and John Stevens Henslow, who worked with rocks and tried to understand the Earth’s past using the newly devised science of geology.

The enthusiastic manner by which these two set about the establishment of a society is typical of the age when there was a genuine desire to share and develop ideas about the natural world and the skies above.

Like-minded men, designated Fellows and graduates of the University of Cambridge came together to present their understanding of the embryonic fields of botany, chemistry, geology, mineralogy and zoology. These represented the intellectual thinkers of their day and it is they who began a movement that paved the way for professional science and social changes, shaping both centuries that followed and resulting in the many advances we benefit from today.

The founding Fellows showed extraordinary generosity in donating their personal collections of British insects, shells, and anatomical, geological and mineralogical specimens. Additionally, by paying membership fees, giving freely of their time and pooling other resources, they established a museum and comprehensively stocked library housed in permanent accommodation, which was further secured in the long term by the award of a royal charter in 1832.

Technological changes in printing and lithography at the time the society began enabled the publication of books and transactions, containing peer-reviewed papers by Darwin, Babbage, Wilson (describing his cloud chamber) and Eddington. Later came women, such as
Anna Bateson, who with her brother William presented papers on botanical variation in 1890, and very many others over the two centuries.

Reading Gibson’s account seduced me into believing I was in the audience during those iconic meetings, when the intellectual giants of the day expounded ideas, demonstrated apparatus and captivated minds. This book deserves your time.