The Commons, Plant Breeding And Agricultural Research: Challenges For Food Security And Agrobiodiversity 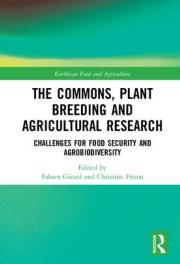 Times are indeed uncertain, but always interesting. Food security is a key challenge, given the context of global climate change, rapidly increasing population and political uncertainty. A related issue is the conservation of agrobiodiversity as a means of increasing food production and control in a dynamic world. This always involves the issue of balance, which requires preservation of the commons through legal and social protection.

Following an introduction, the first of five parts examines access, benefit sharing and licensing, and includes a discussion of patents and open-source licences. Part II presents the summary of the evolution of modern agriculture, with reference to crop breeding and the relative monopoly of the global seed corporations, and considers theoretical frameworks in which ‘the commons’ can be used for the common good.

Part III highlights the issues relating to the diminishing bio-commons, including the protection of traditional seeds – examples include sorghum production in Africa and guarana in Brazil. Part IV covers recent efforts to safeguard agrobiodiversity, especially at local level, and includes the activities of farmers’ movements to re-appropriate seeds from agroindustry.

Legal structures, international treaties and equitable arrangements are examined in the final part.

This is an intense but expensive text, which considers fundamental issues. It examines aspects of food production and security that are rarely brought to public attention, but that are essential for a peaceful and well-nourished global population in the 21st century.