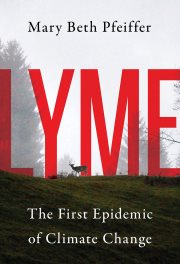 Lyme disease was first described from symptoms that arose in a number of patients in the vicinity of Lyme, Connecticut, in the 1970s. By 2015, the number of cases in the US had risen to 380,000 a year.

In 2006, the World Health Organization linked the spread of Lyme disease to global warming, and the US Government now includes Lyme disease monitoring as an indicator of the rate and impact of climate change. Now known throughout many regions of the northern hemisphere and Australasia, it could be referred to as pandemic.

The Borrelia burgdorferi bacteria carried by various Ixodes sp. ticks has not evolved recently, evidence having been found of a prehistoric Lyme infection in a frozen alpine corpse, and even of ticks preserved in 15-million-year-old amber with Borrelia-like structures in the gut.

However, the recent exponential spread of the disease and the widening geographical range of the tick vectors has produced a wealth of research surrounding Lyme disease that still causes debate regarding the best methods for reliable diagnosis and effective treatment.

There are also a variety of hypotheses to explain why infected ticks are being found in ever-increasing territories. They could be carried by deer, mice or birds, but ultimately, as the world warms, the ticks reach and survive at higher latitudes and altitudes.

Mary Beth Pfeiffer is immune to calls of being a ‘Lyme loony’ and presents a thoroughly researched and extremely well- presented case to raise the banner for patients who can suffer painful and debilitating symptoms for months, years and even decades.

She sensitively tells illustrative, tragic stories of promising young people who have had the zest for life sapped from them. The spread of the disease has even led to a growing number of assisted suicides.

The root of the problem for the unfortunate people who have been infected lies in both the unreliability of diagnostic tests and in the controversial long-term use of antibiotics for treatment.

Pfeiffer concludes with recommendations for greater education and funding for methods of tick control, such as pesticide protection of deer and cattle, genetically engineered mice immune to Borrelia burgdorferi, and vaccine development.

Hopefully, Pfeiffer will raise significant awareness of Lyme to the attention of health authorities, who currently underestimate the real significance of this disease. This book should be instrumental in achieving the required change of perspective.