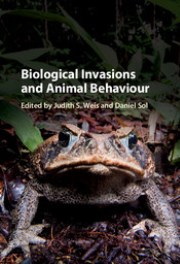 Most researchers agree that humans have directly or indirectly introduced species not native to a habitat or ecosystem, which has produced dramatic changes in the coevolution of both predator–prey and host–parasite relationships around the world.

Furthermore, the spread and impact of 'new' arrivals has changed mechanisms of behaviour of predators and prey (old and new), and given rise to an array of characteristics designed to improve hunting, avoid predation and aid survival. In this book, these themes are discussed by leading experts in articles gathered together in three parts.

In reviewing this book, I have chosen articles that reflect the theme of each section, and that whetted my curiosity and I enjoyed reading. In Part I: Behaviour and the Invasion Process: The role of behavioural variation across stages of the introduction process; Life history, behaviour and invasion success; and Behaviour on invasion fronts, and the behaviour of invasion fronts. In Part II: Behavioural interactions between invaders and native species: Invasive plants as novel food resources, the pollinators' perspective; and Eat or be eaten: invasion and predation in aquatic ecosystems. Part III: Case studies: How behaviour has helped invasive crayfish to conquer freshwater ecosystems; and Invasions by mosquitoes – the roles of behaviour across the life cycle.

The articles are pacy, informative, cross-referenced with current literature and highly relevant to local and international events, such as the displacement of native European crayfish by North American species. Similarly, the future likelihood of malaria becoming established in northern latitudes as the range of the mosquito vectors increases is of growing concern and thus the case study chosen is timely.

Inevitably, a book of this quality carries a hefty price tag but to those working in behavioural and evolutionary ecology and biological invasions, I expect it will be worth it.