The Origin and Nature of Life on Earth 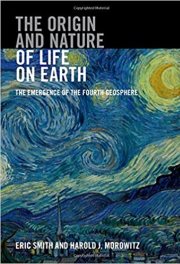 Ideas on life's origins have changed considerably since Urey and Miller produced a collection of organic compounds from simpler precursors under conditions assumed to have existed on Earth during its early history. Since the discovery of deep-sea hydrothermal vents, interest has transferred from the 'primordial soup' of Oparin and Haldane to non-photosynthetic autotrophic ecosystems.

The authors postulate that the first appearance of living organisms, around 4 billion years ago, was not a chance event, but the inevitable outcome of geochemistry changing to biochemistry, according to those properties of elements in the periodic table that enabled them to go through a series of transitions to produce the complex molecules of life.

Smith and Morowitz maintain that the energy disequilibrium between the Earth's interior and its active mantle was used to drive chemical reactions away from equilibrium, using redox processes to fix carbon dioxide in forming a carbon-based biosphere. The story throughout is based on phase transitions, in the route to membrane compartmentalisation, even though there has been limited success in modelling such functional systems to aid our understanding of the living state.

Although hydrothermal vents have been a permanent feature of Earth's environment, we shall not know the exact conditions that produced the biosphere until we can build a living cell de novo, and retrace the route of past life with genome guidance.

Smith and Morowitz employ a multidisciplinary approach in this comprehensive but occasionally over-elaborate and repetitive treatise. The index could have been more reader-friendly, although what to leave out is always a problem in a text of this complexity. It is nevertheless an impressive and original work.

For those interested in an easy-to-follow introduction to this fascinating topic, an excellent starting point would be 'The Origin of Life' by Trefil, Morowitz and Smith in American Scientist, Vol 97(3), p206.