Governing Behavior: How Nerve Cell Dictatorships and Democracies Control Everything We Do 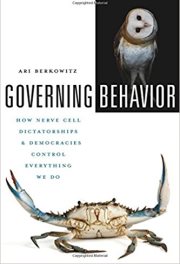 In its 2014 report 'BRAIN 2025: A Scientific Vision', the Advisory Committee to the director of the US National Institutes of Health stated it had "identified the analysis of circuits of interacting neurons as being particularly rich in opportunity, with potential for revolutionary advances". Anyone interested in what we know now and what we might hope to understand in the future about how circuits of interacting neurons produce behaviour will find Berkowitz's elegant small book, Governing Behavior, a useful introduction and overview.

Using well-known examples, such as crayfish escape responses, owl hearing and hunting, and bird singing, he discusses the various forms of underlying neural circuits by analogy to how states govern their behaviour – from dictatorships to democracies. However, he also stresses the differences between these two control systems, noting, for example, that nervous systems have evolved over long periods of time by building on whatever previously existed. As such, we should not be surprised to find that nervous systems can use different forms of government to produce the same behaviour – often, as he puts it, at the same time.

Governing Behavior is a model of how to deal with a complex subject in an interesting, concise and clear manner.