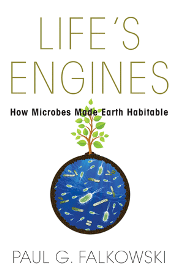 Taylor Swift and Katy Perry may catch the attention of most youngsters, but it was the microbial world that captured the attention of this author as a child, and his opening pages vividly record the birth of an enduring fascination. Sadly, this heady momentum is lost in the chapters that follow.

He plunges instead deep inside the cell, describing mitochondria and ribosomes, before discussing the appearance of photosynthesis 2.4 billion years ago and the establishment of cycles of nitrogen and sulphur (keyed to the author's preoccupation with the Black Sea).

Evolution is traced through Darwin and Mendel, with Dujardin in 1844 observing the similarity between free-living choanoflagellates and the choanocytes of sponges, through Schimper's recognition of endosymbiosis in 1883 and on to the antibiotic era (although Fleming and penicillin aren't mentioned), through DNA and climate change, and even space travel... then, suddenly, the book ends.

Although Falkowski cites Steno (1669) as the first to write on fossils, Robert Hook actually portrayed them in 1665 and explained how they formed. The author has the date of the Industrial Revolution as 1859, a century too late, and although he enthuses about Leeuwenhoek, he repeats the erroneous view that Leeuwenhoek's lenses were spheres. They never were.

This is a good read, but there are very few living cells and not a hint of the majestic complexity of the microbial world. How microbes modified the environment is here, right enough, but the reader won't find out what they are or what they really look like.