The Life of Poo 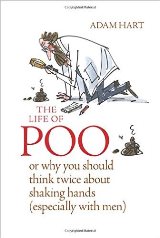 The Life of Pi this is not. There is nothing at all romantic about the subject of The Life of Poo, a text dedicated to human faeces.

If you want to know exactly what is found in a typical faecal sample, read the book. If that does not grab the attention of the curious, then concentrate instead on author Adam Hart's rigorous exploration of the apparent rise in allergies and the importance of microorganisms to life.

In fact, rather than focusing on faeces per se, it is a life history of faeces – from their origin to their final appearance – and therefore a novel way to educate about microbiology. Only chapter one encourages us to examine our faecal output in any depth, including how to scrutinise your poo while sitting on the toilet (the chapter title is 'Are you sitting comfortably?').

Later chapters explain the various habitats and ecological niches in the gut and the diversity of bacteria that thrive in them, and the functions of internal bacteria in maintaining a healthy bowel and our immune response.

The complexity of the relationship with our gut bacteria may even be involved in obesity. The Christensenellaceae family of bacteria are associated with a lean body mass index and studies suggest they could be used in 'bacterial therapy' for obesity. This would involve faecal microbiota transplants – something that would take some getting used to.

The idea expressed in the title on why we should think twice about shaking hands with men comes from the fact that men are less likely than women to obey a sign in the cloakroom to wash their hands after using the toilet, according to surveys.

Hart also looks at the use of anti-microbial gels, hand sanitisers and all other products that are aimed at killing bacteria, which if used incorrectly are worse than useless.

The final chapter is a summary of what the book is about. It is a trip around the life of bacteria, their influence on human existence and, with the possibility of bacterial therapy, faecal transplants to treat obesity. A marvellous read in every sense.