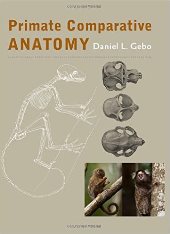 This book covers just about everything you need to know about non-human primates. Despite the name, it includes phylogeny, adaptation, dietary aspects and musculoskeletal mechanics, as well as anatomy. The author acknowledges that Homo sapiens are also primates and the final chapter presents human anatomy in comparison with that of the great apes.

The text is separated into 10 chapters and after the first (phylogeny and adaptation) is the marvellously titled chapter 'The Wet-Nosed Primates', which includes the Lemuridae, lorises and indriids, among others. Chapter three is all about the dry-nosed primates such as tarsiers and capuchins, plus the spider monkey and the wonderful siamang gibbon. These two chapters indicate the progression of the primates from relatively primitive forms to the great apes and, of course, dry-nosed humans.

Comparative anatomy starts in full from chapter four, but the real insights in comparison start with a closer look at head forms in chapter five. Here, we see the various forms that define types of primate and their particular lifestyles. For example, on page 71, cranial orbit size is said to correlate with whether a primate is active during the day or night, and the relative size of the brain's cerebellum is linked to the levels of balance achieved by different primates.

Locomotion and diet are critical aspects of comparison, with the latter related to dentition and the former to prehensile tails, extra-elongated forelimbs (as found in gibbons) and, for the apes, a shoulder that can perform circumduction (full-circle rotation of the arm above the head).

Perhaps the most fascinating diagram is on page 156, which shows the extremely diverse feet of primates, reflecting their lifestyles and abilities to match their various habitats. Looking at the figure, you would think the impressions are of feet from animals of different orders altogether, but they are all primates.

With references at the end of each chapter, author Daniel Gebo has produced a text that can only be described as invaluable to the researcher, academic, conservationist, primatologist or student of evolutionary studies. A dream of a book.