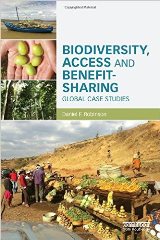 Biodiversity access and benefit sharing are components of the Convention on Biological Diversity, which came into force in 1993 and will soon be affected by the Nagoya Protocol, implemented in 2014.

The Protocol is focused on improved legal certainty and transparency for the owners and users of genetic resources. Author David Robinson uses benefit sharing case studies to illustrate the likely impact of the protocol. Part I has definitions and context along with details of the Nagoya Protocol. Each of the eight chapters in Part II details a case study. The geographic range, with emphasis on the tropics, is broad: Madagascar, Thailand, Samoa, Morocco, Australia, Vanuatu, New Guinea and Panama.

One example is the Madagascar International Cooperative Biodiversity Group. Natural products drug discovery, also known as bioprospecting, is used here to encourage the mutual/partnership benefits of scientific capacity development and the conservation of natural resources. The case of Homalanthus, a rainforest species of Samoa used in the treatment of intestinal complaints, illustrates the value of local botanical and medical knowledge, and reflects some of the tensions that emerge due to sharing financial benefits, as well as issues surrounding the use of synthetic analogues, covered by the Nagoya Protocol.

The case studies highlight the complexity of fair and just use of natural plant resources. Safeguards are vital to ensure all-round benefits. These and other considerations are discussed in Part III with emphasis on how the Nagoya Protocol might contribute to equitable resource use.

Overall, this is a useful reference book and a reminder that biodiversity is much, much more than a carbon sink.