The Minimalist Program: The Nature and Plausibility of Chomsky’s Biolinguistics 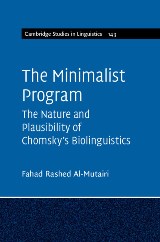 The publication of Noam Chomsky's The Minimalist Program was a milestone in the study and development of linguistics as a scientific discipline. The strong minimalist thesis, which extends linguistic study into broader fields such as neurolinguistics and the philosophy of language, has advocates and opponents, and is not universally accepted.

Al-Mutairi argues that some misconceptions regarding the development of Chomskyan linguistics abound and attempts to clarify these. He suggests that insights from biology and neuroscience may have been a driving force that enabled the minimalist programme to influence theoretical research such as Universal Grammar and Faculty of Language.

Later in the book, you are taken through a comprehensive and thorough evaluation of the strong minimalist thesis through comparing and contrasting aspects to other similar, though distinct, hypotheses. This includes, for example, reflecting on the empirical evidence of recursion only and merge only. In later chapters, he also tackles the philosophical basis of Chomsky's work, and both the strengths and weaknesses of the minimalist programme.

The depth and critical rigour with which Al-Mutairi exposes both Chomsky's work and those arguments that have been brought against the strong minimalist theory will ensure that linguistics researchers and new students gain a detailed insight into the groundbreaking work that has already been done for them. They will also discover how far the ramifications of linguistics reach into other disciplines. Recommended.