What if? Serious Scientific Answers to Absurd Hypothetical Questions 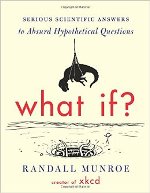 Randall Munroe is the creator of popular web comic xkcd. If you are not familiar with xkcd, it is a humorous stick figure cartoon strip about technology, mathematics and life as a scientist. The UK edition of What If? is a collection of questions submitted by xkcd readers that Munroe has answered in cartoon form and previously published online.

The questions wonder what would actually happen in ludicrous conditions and scenarios – for example, what would happen if you put the entire population of Earth on Rhode Island? Or, what would a mole (the unit) of moles (the animals) look like?

I'm not sure if I got the joke. My first smile appeared on page 88 – something about C4 explosives and boomerangs – and it was not until page 191 that I laughed, when the clever connection was made between travelling in the International Space Station and the Proclaimers' 1988 song I'm Gonna Be (500 Miles).

Although the volume is badged as a UK edition, it appears to be a sparsely edited assortment from the original web source, full of North American references. Baseball, ice hockey, and "the most and least flown over states" seemed to provide a somewhat blinkered view of the world at large while paradoxically attempting to inform with some big scientific ideas, mainly in physics.

That I didn't get it led me to wonder if, rather than my humour being bypassed, the source material was missing something in the translation from the author's web comic.

When I visited xkcd.com, the humour and fun quickly returned. The original blog is interesting and accessible and well linked to wider resources such as YouTube videos, safety documentation and other items.

It's worth taking a minute to look up the web comic: you'll find it informative and entertaining. Enjoy this excellent blog, its science, humour and illustrations. Do, however, save yourself £15, as it simply does not translate comfortably into book form.