Bad Moves: How Decision Making Goes Wrong and the Ethics of Smart Drugs 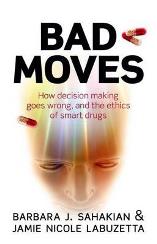 In being unable to reach a decision concerning the fate of Mary Queen of Scots, Queen Elizabeth I remarked that 'the hinder part' of her brain 'did not trust the forward sides of the same'. Whether reading Bad Moves would have helped her is debatable.

From the first part of the book, she would certainly have learnt in greater detail about the functioning of the parts of her brain. The book, however, is largely a polemic for public debate on the availability of drugs that enhance the ability to perform certain tasks and that help short term memory. As such, it is a reprise and extension of an article that appeared in Nature.

I used to be undecided about the issue, but now I'm not so sure. I read the book quickly and then spent a good deal of time arguing about the issue, so I suppose it achieved its purpose. No-one would surely object to a pill that enhanced memory. Even if we do not suffer from dementia, everyone's memory goes – or changes – as we age. However, a pill whose main purpose is to make bomber pilots more alert is more open to question.

As far as the debate goes, it should perhaps be concerned with the problem of how it might be possible to develop drugs that make people more moral. Drugs such as Ritalin appear to be 'technological fixes' to a problem for which there already is a cure – a good night's sleep. Are we heading for a Brave New World where in order to function we will require our daily 'soma'?

We live with a 'hinder part' designed for a life where Hell might have been other people – if not other individuals then 'outsiders' wanting to kill you and steal your partner. It still dominates, to our and the planet's detriment.