An injection of facts

In recent years there has been a reduction in vaccine uptake across many immunisation programmes around the world, leading to outbreaks of vaccine-preventable diseases. The UK lost its ‘measles-free’ status with the World Health Organization (WHO) after more than 200 cases of the disease were recorded in the first quarter of 2019.

Undeniably, a significant factor in the rise of ‘vaccine hesitancy’ is the spread of negative, anti-vaccination messaging and false information online. Last year several major tech companies announced policies to tackle this issue, following calls from public health organisations and policymakers worldwide for social media platforms to do more to control misinformation being promoted and shared on their networks.

YouTube announced in February 2019 that videos and channels containing anti-vaccination messaging would be demonetised, by supposedly disabling adverts that normally run alongside these videos and allow the content creator to make money from each view. The company also claims to be working on algorithmic changes to reduce the recommendation of anti-vaccination messaging and the conspiracy theories linked to such information.

In a quick test of YouTube’s updated search functions I searched for phrases such as ‘vaccines safety’ and ‘vaccine side-effects’. Initially, I did find mostly informative, pro-vaccine messaging, including a lot of content from the Centers for Disease Control and Prevention in the US. However, in a few more clicks I got to an interview with [disgraced anti-vaxxer] Andrew Wakefield and, from there, more vaccine misinformation. Searching the term ‘vaccine injury’, on the other hand, immediately took me to anti-vaccine content, some of which still appeared to be carrying adverts.

Instagram and its parent company, Facebook, also announced policy changes in March 2019 following pressure from US politicians. The photo-sharing platform says it aims to reduce the rankings of groups and pages that share vaccine misinformation so that they are harder to find, and promised to reject adverts that contain and target vaccine misinformation content. The company also announced it would be working with the WHO to direct searches related to vaccines to reliable, accurate sources.

When I tested these policy changes out on Facebook, the auto-complete function’s suggested search as I typed ‘vaccine’ was ‘vaccine injury stories’. Despite this worrying start my search led to a range of medical associations, health services and the WHO. Perhaps most importantly the first result was from a children’s hospital, with a personal and emotional story of a mother who had been a ‘vaccine sceptic’, but had changed her mind after nearly losing her child to a vaccine-preventable disease.

On Instagram the auto-complete search for vaccines suggested an account called ‘vaccines_kill_’. Searching the word ‘vaccine’ for the first time gives a notification advising users to go to the WHO for information, as well as further posts containing both pro- and anti-vaccination messaging, none of which contained reliable information. Also in 2019 Twitter announced that searches for tweets relating to vaccines would result in a link to health agencies’ websites. However, when I searched ‘vaccine’ on Twitter the first tweets that came up below a small and subtle link to the NHS contained anti-vaccine messaging.

Even with these new anti-misinformation policies and algorithms, reducing the visibility of anti-vaccination posts is clearly a difficult task for tech companies. Huge amounts of content are uploaded to all of these platforms every day and social media executives have always been reluctant to censor content unless it is illegal. 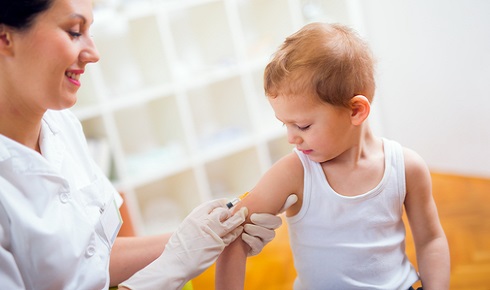 Initiatives to improve online literacy in parents, alongside targeted information and personal stories about vaccines, have improved vaccination rates in countries like Denmark.

In response to the crisis in the UK, the prime minister, Boris Johnson, made an urgent call in August 2019 for more to be done to raise vaccination rates. However, there has been no co-ordinated policy or movement towards addressing vaccine misinformation online. Last year the Cabinet Office and the Department of Health and Social Care published a consultation[1] on preventative medicine in the 2020s, which highlighted the importance of immunisation programmes and promised a government strategy launch in spring 2020. However, vaccine misinformation was mentioned only once, with no policies or solutions presented.

Likewise, the Department for International Development released a thematic study[2] on vaccine hesitancy. Citing blog posts and opinion pieces rather than actual studies, it also failed to suggest potential solutions, other than the idea of a government-run “perceptions management campaign”.

Even if the UK Government is keen to take action, is it practical or even possible for one government to regulate international internet companies? If it is possible, it is unlikely to be popular. The concept of net neutrality and free speech is central to the internet and those pressing for regulation are already facing lawsuits from those defending their right to express contrasting views online.

Perhaps the focus must be on equipping the public to critically interrogate online sources of information. Finland, Sweden and the Netherlands have all incorporated digital literacy and critical thinking[3] about online misinformation into public school curricula. According to the Open Society Institute – Sofia, which runs the Media Literacy Index, education on how to find accurate information and determine reliable sources reduces the impact of misinformation and makes these countries more resilient to fake news and conspiracies[4].

A literacy and information campaign in Denmark has helped return the uptake of HPV vaccination to almost 90% from its lowest point in 2015, when it dipped below 50% amid widespread misinformation about the vaccine. Health services talked directly to hesitant parents to understand their concerns surrounding HPV vaccination and, with the help of public relations experts, authorities designed a targeted information campaign, which launched in 2017. Crucially, the campaign partners also developed tools to help readers evaluate information sources and engaged in open dialogue with social media users.

There is a lot to be learned from the success of this targeted approach of positive messaging, especially the importance of consultation and open dialogue with hesitant parents. A common hurdle for vaccine uptake is that the previous success of the vaccination programme prevents awareness of a disease, making the risks of a vaccine, real or fabricated, a larger factor in a parent’s decision making. Inclusion of information about what the vaccine is trying to prevent, framed in a personal rather than a scientific way, can fill an important information gap.

While co-ordinated policymaking across the international waters of the internet seems unlikely, localised health and digital literacy campaigns, clear policies from national governments and health agencies, and more robust efforts from social media companies on de-promoting the spread of misinformation could help rebuild the public’s trust in vaccines.