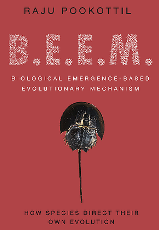 If the central idea of this book turns out to be correct, the author could be looking at a Nobel Prize. In short, he suggests that natural selection may not be the main mechanism of evolution.

While the lay literature abounds with outlandish assertions usually categorised as pseudo-science, this book is rather different. Raju Pookottil is not a biologist, having qualified as an engineer, but is remarkably well read in biology. He is at pains from the outset to clarify that he presents only a hypothesis, which has not been tested.

The hypothesis essentially is that living organisms possess emergent intelligence at multiple levels, from the cellular to the societal, that this intelligence can generate gene mutations, that mutations are tested for fitness, and that the new genes can be passed on to subsequent generations. This chain of processes is set out with admirable clarity, the structure of the argument is well thought out, and a wealth of scientific studies is cited.

Pookottil is quite clear that he is attempting to overturn the central dogma of evolution's modern synthesis. He does not see DNA as the controller of the cell, but rather as a library created by the cell to store information. The cell's millions of molecules form a data network, each complying with very simple rules, but because of their large numbers, creating complex behaviour, in much the same manner as social insects do. This networking may occur between cells and tissues, as well as between individual organisms. The selfish gene of Dawkins is apparently a delusion.

While Pookottil's breadth of knowledge is impressive, the evidence cited is necessarily selective. He relies particularly heavily on Edward J Steele's Lamarck's Signature, which reviews the evidence for soma to germ line gene transfer. Neither author denies that natural selection occurs, but they doubt that it is the major driver of evolution. There is always a danger that enthusiasm for a new idea can trigger bias when assessing evidence, and this is exemplified by Pookottil's repeated references to a single study, which purports to show that Arabidopsis thaliana can replace a knocked out gene. As the author quite fairly points out, the study has not been replicated by other researchers.

Although it would be interesting to see a critique of BEEM by experts in molecular and evolutionary biology, overall I am most uncomfortable with Pookottil's rejection of parsimony. His explanation for evolution is many orders of magnitude more complex than natural selection, and relies on complexity if it is going to work. Descriptions of networks at various levels may sound plausible, but how they might be vertically integrated – i.e. from cells to tissues to whole organisms – is even more obscure. Nevertheless, it is important that the established consensus on any aspect of science is open to challenge, and for that reason the book is worth reading.