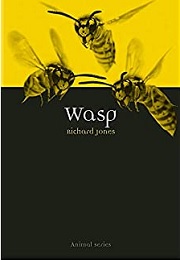 Richard Jones has clearly had enough of the bad press wasps have always received. While bees are seen as industrious, beneficial to humans and the wider ecosystem, and even cuddly, their wasp cousins are unfairly regarded as far more dangerous, vindictive and thoroughly deserving of destruction. In Wasp Jones seeks to redress this balance.

Many of our misconceptions stem from a confusion between wasps and bees, while others are simply fallacious. You are perhaps familiar with the cartoon scene of a character, having knocked against a nest hanging from a tree, being chased by a swarm of wasps? It turns out, unlike bees, wasps do not swarm in any co-ordinated fashion. Moreover, most wasp nests are built out of plain sight and few hang from branches. As another example, I remember being taught in school that bee stings are acidic and wasp stings alkaline, and so could be treated with baking soda or vinegar respectively. In fact, the pH of wasp venom is so close to neutral (6.8) that any difference is immaterial, with the pain associated with these stings relying not on their pH but rather on the venom injected.

Jones admiringly details many aspects of wasp biology and ecology including their extraordinarily built nests, the evolution of their distinctive colouration, their ecological role as insect predators and the genetic underpinning of the different castes of social wasps. He also provides a historical perspective, explaining how our understanding developed, for example through advances in microscopy and Linnaean classification. Cultural references to wasps in literature, poetry and painting appear liberally throughout the book, many shown in the numerous illustrations.

Expanding the scope of its content beyond merely history and science makes Wasp, and the other books in Reaktion’s Animal series, welcomingly unique.