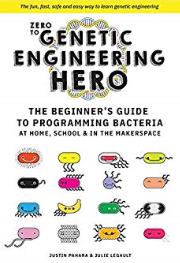 Thanks to the ever-falling cost and ever-increasing efficiency of genetic engineering, biotech projects that would be unthinkable to multi-million-dollar institutions just five or 10 years ago are now being conducted by small startups and even in home laboratories. Alongside these advances science educators have, for many years, demonstrated simple genetic techniques to interested amateurs in the hope of demystifying the science of DNA. It is now a common sight at science fairs to see school groups streaking agar plates and extracting DNA from strawberries. Nevertheless, it is still something of a shock to see a guide to the techniques of genetic engineering aimed at children.

The authors, synthetic biologist and entrepreneur Justin Pahara and designer-entrepreneur Julie Legault, are the brains behind Amino Labs, a company that has developed portable and affordable genetic engineering starter kits for schools. Their mantra is that education – and particularly hands-on education early on in life – is the best way to promote a healthy understanding of this rapidly advancing area of science. As society’s reliance on GMOs and biotechnology is only set to increase, the authors hope to ensure the next generation of adults is ‘bio-literate’ and able to tell science fact from fiction.

Zero to Genetic Engineering Hero has been written in conjuction with a range of biologists and two 8th grade ‘junior editors’, and is essentially a genetics textbook centred around practical activities. These begin with the classic aforementioned DNA extraction from fruit, then chapters two and three focus on setting up a workspace and learning how to culture cells. The genetic engineering begins in earnest in chapter four with the addition of DNA plasmids to E. coli cells, and further chapters explore protein extraction, enzyme processing and manually switching on genes in situ.

The workbook is the result of years of work with science educators and biohackers to simplify protocols that can frustrate even well-equipped undergraduate scientists. The book is attractively designed, with cartoon diagrams and simple language that will appeal to pint-sized biologists, plus sections allowing older readers to go deeper into biological theory. The biosafety information for individual activities is clear and robust, although given the target audience, there is a certain irony to the warning that pets and “small children” must be kept away from the workspace.

One area in which the book seems light is on the many bioethical and legal issues surrounding genetic engineering. There is a small notice on the fact that in certain countries outside North America you may need government approval before setting out on your genetic engineering adventure. Aside from that, and a ‘genetic engineers pledge’ at the start of the book – “I pledge with all my DNA, cells and knowledge… to never use my genetic engineering mastery to lay harm on the natural world or anybody” – there’s not much else on what genetic engineers should and shouldn’t do with their technology.

This children’s guide to splicing plasmids is a fascinating symbol of how far genetic engineering has come in the past two decades and the authors’ intention to make this science accessible to all is admirable. However, in their quest to replace the negative headlines and misinformation that often accompany genetic engineering with a positive message, they may have overlooked some of the most important issues appearing on the horizon, as genetic engineering continues to move out of high-spec laboratories and into the hands of ordinary people and even kids.