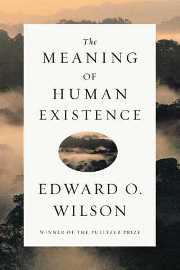 Wilson is one of those scientists who you imagine sneaking the word 'eminent' on to his business card, such is his contribution to our understanding of the natural world.

Wilson's stature casts a long shadow over his most recent book, and seems a prerequisite for anyone who considers The Meaning of Human Existence to be an appropriate title for a book that runs to fewer than 200 pages and contains no citations. The thing itself, a loosely thematic series of essays, does cover a lot of ground in not answering the question, but it struggles as a cohesive whole.

There is a section about ants, which is fun, and a few stabs at religion and Richard Dawkins, which is less fun. He also gives plenty of space to natural selection. Overall, though, it's a fairly weak reassertion of scientism as a counterbalance to the humanities in the search for meaning.

There is plenty of lip service paid to the importance of both, and Wilson is known for trying to build bridges between the two, but it is pretty clear that he sees us as far too in thrall to literature when we should be interested in laboratories.

His prose remains warm and his tone consciously light, but there is a hole in the centre of this book where readers will reach for something more substantive without success.