The Hunt for the Golden Mole 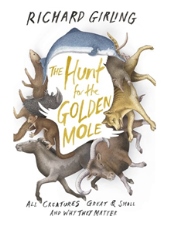 Rare and elusive animals are fascinating in ways that go far beyond their biological significance. These mysterious creatures serve to remind us that, despite the technological trappings of modern science, there is still a huge amount that we don't know (and perhaps will never know) about the natural world. They also have the power to generate feelings of sadness and melancholy, given that many of these species will become extinct before they have been observed and documented.

Such is the probable fate of the Somali golden mole, the titular character in Richard Girling's fascinating book and known only from a fragment of jawbone in an owl pellet collected in 1964.

Although the mole is a recurrent theme throughout the book, the story of its discovery and of the author's quest to track down its remains is merely a backdrop for Girling to explore broader themes, such as the history of exploration, the science of collecting specimens and naming new species, and, most importantly, how this relates to the contemporary biodiversity crisis.

Fascinating and beautifully written, this is a gem of a popular science book filled with fascinating anecdotes and little-known facts from the far frontiers of natural history. Girling manages to convincingly and passionately argue for the conservation of the "small, the obscure and the humble" that still inhabit the Earth.