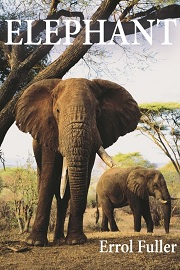 Lavishly illustrated throughout with quality colour photographs, this book is as much about the images as it is about the text. Following a brief introductory section there are chapters devoted to African and Asian elephants. The detail provided is somewhat superficial and generalised, but makes for an easy read and provides basic information about these two species as well as mentioning recent classificatory changes relating to the African forest elephants.

The book documents the evolutionary pathway to present-day species, focusing largely on the mammoths and mastodons. While hyraxes and sirenians are mentioned as having a common ancestor, the links are not explained. The following two chapters on ‘Elephant curiosities’ and ‘The elephant in art, literature and popular culture’ comprise nearly 50% of the book. This reduces its scientific potential, but does make it attractive to readers who are more interested in the cultural significance of the elephant throughout the ages.

The final chapter is centred largely on the decline of the African elephant and explores the issues surrounding elephant conservation. The impact of the ivory trade and its prevention are covered briefly, and there is a lengthier discourse on the pressures of an increasing human population and the need for elephants to roam far and wide. Underpasses and bee hives are discussed as possible solutions to prevent conflict between humans and elephants. Finally, there is a brief reference to the cruelty that may often be directed to the increasingly large number of Asian elephants held in captivity.

General readers who have an interest in these magnificent creatures will enjoy Elephant, but it will be of limited value to scientists wishing to advance their knowledge and understanding of either elephant biology or ecology.