Out of the woods

While the world concentrates on an altogether different disease, young trees in the UK are showing signs of resistance to ash dieback, writes Dr Emily Beardon

As COVID-19 continues to dominate our headlines, it is easy to lose sight of the many diseases to have spread through the country in recent times. One of these is slowly killing millions of individual ash trees right now, in the ongoing ash dieback epidemic.

All plants face the challenge of surviving in environments that may at times be unfavourable. Being rooted in the ground, they cannot escape from prevailing climatic conditions, disease or herbivory. This is no different for ash trees, which are facing severe disease pressure from ash dieback. Unlike humans, trees cannot socially distance and vaccinations are not an option. Treatment and eradication of this disease is impossible, and in most cases mortality will be unavoidable.

The year 2020 has been declared the International Year of Plant Health by the United Nations General Assembly, providing a good opportunity to look back over what we have learned about ash dieback in the last few years, how ash is faring and what the future holds for this iconic tree.

Trees provide us with resources many of us take for granted – oxygen, clean air and water, fuel, timber and a stable environment. They cool our cities, reduce flood risk and improve our mental wellbeing, but the services they provide are often overlooked and undervalued. Nevertheless, the identification of ash dieback in the UK in 2012 attracted much media attention and public interest. We now know that it was present here much earlier.

Cankers on dead trees and ring counts suggest the fungus could have been present in the UK as early as 2004[1]. It is believed to have arrived in the UK via two routes: the importation of infected nursery stock and by windborne spores that were blown across the channel from mainland Europe, affecting East Anglia and Kent most severely.

If you know what to look for, you’ll see signs of ash dieback everywhere. Go for a walk in the park, head out to the woods or simply stop to look at an ash tree in a hedge, and chances are you will see the tell-tale symptoms of this disease: orange-brown lesions on the stems (which are particularly noticeable on the bark of young saplings) and the death of shoots and branches. In summer, black spots, curling and wilting of leaves are also visible. Over the last 20 years this disease has spread across the UK and is now found virtually everywhere that ash is present.

Ash trees are Britain’s third most abundant tree in forest areas and the most common hedgerow trees. Native European ash (Fraxinus excelsior) is an important keystone species in the UK and across Europe, providing many functions, including a faster rate of litter decomposition and more rapid nutrient cycling than many other tree species. More than 950 other species also rely on ash for all or part of their life cycle, including 12 birds, 28 mammals, 58 bryophytes, 68 fungi, 239 invertebrates and 548 lichens. Forty-four of these species have only ever been found on ash[2]. Therefore the species that depend on ash for their survival are also threatened by ash dieback.

Ash dieback disease is caused by the fungal pathogen Hymenoscyphus fraxineus. It is native to East Asia: Japan, Korea, China and the Russian Far East. In these countries it lives seemingly harmlessly on the native ash species Fraxinus mandshurica, which is thought to have co-evolved with the fungus.

This is in complete contrast to its behaviour in Europe. On European ash, infection starts when spores of the fungus land on an ash leaf. The fungus penetrates the leaf, causing orange-brown spots before spreading into the stems and branches causing characteristic diamond-shaped lesions on the bark. The lesions start to girdle the branch, eventually leading to dieback of the branches and death of the tree. Symptoms of ash dieback were first identified in Poland and Lithuania in the early 1990s, but frost and drought were initially blamed, and the real cause wasn’t identified until nearly 10 years later. Since then it has spread steadily across Europe. 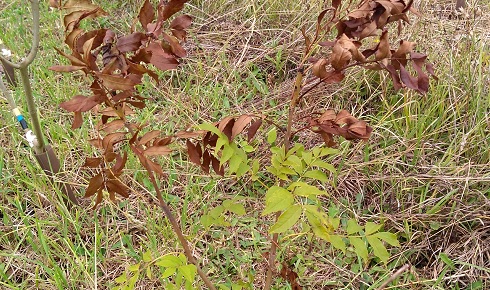 An ash sapling succumbing to ash dieback in field trials

The consequences of this disease come at a high economic and environmental cost.  Last year scientists estimated a total cost to the UK economy of nearly £15bn over 100 years[3]. Much of this is due to the loss of ecosystem services, with safety felling, replanting and loss of profits for foresters also contributing factors. For the last few years the future has looked bleak for ash trees, but recent research paints a slightly more promising picture.

The impacts of ash dieback are known to vary between populations and sites. This may occur for three reasons. First, simply the chance avoidance of infection; second, some environments are unfavourable to the fungus or especially favourable to the tree; and, finally, some trees possess some level of resistance.

Although the mortality rate of ash trees in Europe is high (up to 70–85% depending on the environment[4,5]) it is promising to note that even after more than 20 years of exposure to the disease in some areas, none of the investigated sites have seen 100% mortality[5]. This suggests a minority of trees do show some level of genetic resistance to ash dieback, which has been backed up by genetic studies[6,7].

Genetic resistance to ash dieback will be essential if ash populations are to survive and recover in Europe. The effectiveness of resistance in the recovery depends on how common resistant trees are in the environment and how heritable the resistance is. We now know that a minority of trees do possess heritable genetic resistance and that this resistance is determined by many different genes.

This suggests that ash populations could recover through natural selection over a long period of time[8]. Ensuring resistant trees are maintained in the environment to produce seed is essential, as these will cross-pollinate with other resistant trees in the area. Recovery could also be facilitated through conventional breeding programmes, which are already being set up across Europe with the aim of producing genetically resistant seed.

In some areas it appears that natural selection could already be visibly taking place. In one of my local woods in Norfolk the forest floor is covered in young ash saplings. Some do show signs of dieback, but many do not. Research suggests ash trees in other regions of the UK may be faring even better[9]. This means that the high ash mortality we have seen thus far in the south-east may not be representative for the rest of the country.

Time will tell how many of these ash saplings will reach an age when they can produce seed of their own. The hope is that they will cross-pollinate and their genes will recombine, producing the next generation of even healthier ash trees. It might take decades, but if ash responds in a similar way in other parts of the country, a healthy ash tree may once again become a common sight.

My own research focuses on understanding how different trees respond to infection of ash dieback and the defence mechanisms underlying the resistance. We are also interested in how ash dieback will affect ash trees’ ability to defend themselves against other biotic attacks in the future. It is important to know how the next generation of trees would respond to future pests or diseases if only the survivors remain to produce seed. We are investigating whether there might be a trade-off between resistance to ash dieback and resistance to insect pests. 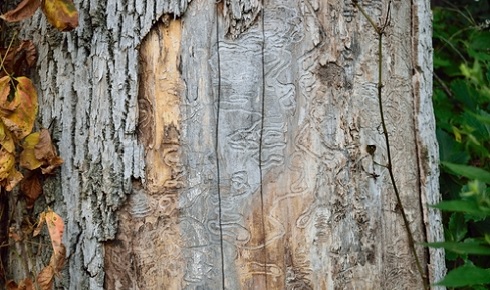 An ash tree damaged by the emerald ash borer beetle

Of particular concern is the emerald ash borer (Agrilus planipennis), a wood-boring beetle native to Asia that has wiped out billions of ash trees in North America since it was accidentally imported there in the late 1990s. This beetle has been established in Russia for several years and has now been reported in parts of Ukraine[10]. Its spread westward is occurring at around 12km per year and is predicted to reach central Europe within 15 to 20 years[11]. It is feared that those ash trees that survive the ash dieback epidemic may be wiped out entirely by the arrival of the emerald ash borer in Britain.

However, researchers in the UK and US recently showed that saplings of European ash were much less susceptible than the American ash species Fraxinus nigra. In controlled inoculation experiments, European ash did suffer from initial attack by the beetle, but the beetles’ development was restricted and a much smaller proportion of eggs developed into later instar larvae[12]. European ash showed a similar level of resistance to emerald ash borer as the native Asian ash species Fraxinus mandshurica, which coexists with emerald ash borer in East Asia. Candidate genes for resistance to emerald ash borer have now been identified in the genomes of diverse ash species[13]. 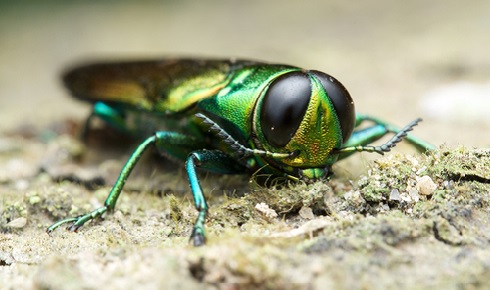 While European ash trees might suffer some harm from the beetle, a healthy ash tree is not expected to be severely damaged. What is more concerning is the impact this beetle may have on trees already suffering from an ‘underlying health condition’. The prevalence of ash dieback means that if the emerald ash borer arrives in the UK it will encounter a population already weakened and less able to defend itself.

This could have devastating and long-lasting effects. It is therefore essential that the emerald ash borer is kept out of the country to give our ash populations a chance to regenerate through natural selection and breeding approaches. If a new population of resistant trees is able to regenerate, hope will return that Britain can retain its ashes for decades and centuries to come.

Dr Emily Beardon MRSB is a postdoctoral researcher at the John Innes Centre in Norwich. Her research aims to better understand how ash trees respond to infection by ash dieback and whether there are trade-offs between resistance to the pathogen and resistance to herbivorous insect pests.