Gone with the wind

Dispersal shapes the world around us. At local scales it determines the chance that two individuals will meet. Over larger scales it determines species distributions, and the pace and scale of colonisation of new areas. Most animals, be they terrestrial or aquatic, have different modes of dispersing that have evolved to carry them over a range of distances – think migrations of wildebeest across the plains versus day-to-day movement to find food and water.

Many species also have systematic variation within them, where some individuals move further than others. This might be driven, for example, by varying needs of the two sexes or by different strategies that prove advantageous under different circumstances. The locust swarms that have plagued the African continent within the last few months show how different strategies can appear in a temporally variable manner, with profound and potentially devastating implications for entire ecosystems that fall within the newly altered, dispersing species range[1].

In contrast, increased dispersal can sometimes be useful to us if it involves the spread of so-called ‘beneficial’ species. This includes spiders or ladybirds, whose presence is helpful if they predate upon unwanted pests, such as aphids within farmed environments.

The dispersal mechanism that underpins the most widespread of distribution capabilities is flight. Flight can be active or passive, or a mixture of the two, and typically involves the use of physiological structures that are intrinsic to one or more life stages of the organism. The large surface area of a bird’s wing and the ‘pappus’ (feathery bristles that act as a sail or parachute) of a dandelion seed are two examples of very different types of structure that harness the power of the wind. 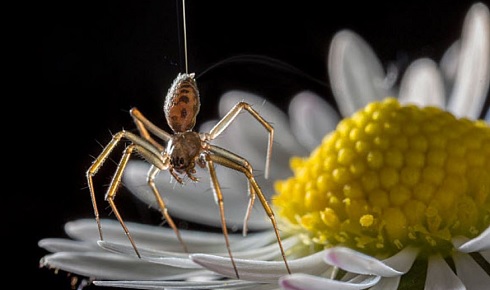 A money spider 'tiptoes' on a daisy as it prepares to balloon off to pastures new.

An animal that is perhaps less naturally associated with flight is the spider. Their eight-legged bodies can be a wide variety of shapes, from the round, spiny ‘jewel’ spiders of Australia (genus Gasteracantha) to the long, thin, pencil-shaped Pholcus spiders occupying corners of many UK houses. Neither Gasteracantha nor Pholcus have wings or structures that could act as an aerofoil, but their wingless appearance is misleading. Passive flight using only external forces, such as the power of the wind, remains an essential part of the life cycle of these and the vast majority of spider species across the globe.

Spiderlings (or small adult spiders) have no wings but they ‘fly’ by creating a temporary silken ‘sail’ in a process known as ‘ballooning’. Individuals climb to a high point and stick their abdomens skywards in a position known as ‘tiptoeing’, releasing a long line of silk as they do so. This silken line, once caught by the wind, creates sufficient uplift to take the spider up into the air. Spiders actively decide to balloon, but once airborne it is not currently believed they can control for how long they fly or their flight direction and so they have no control over where and when they land.

Ballooning is a strategy used by spiders to reach new areas – and in many instances to be the first arrivals. Over evolutionary time frames this behaviour has enabled them to be among the first pioneer species to colonise oceanic islands as they arise from the ocean floor. The randomness of which particular spider flies past first may help explain the diversity and uniqueness of spiders to such isolated areas[2]. Over shorter ecological time frames ballooning enables spiders to recolonise a farmer’s field after human activity has emptied it of its previous residents.

Ballooning is a risky strategy, however, because the assumed lack of control over flight direction and duration means there is little chance to avoid predators, such as birds, on the way or to prevent landing in unsuitable habitat. Nevertheless, the strategy persists widely in nature even in species where the chances of finding suitable habitat may be low – for example, where species are restricted to a narrow ecological niche. 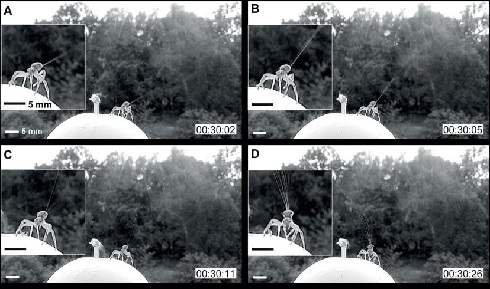 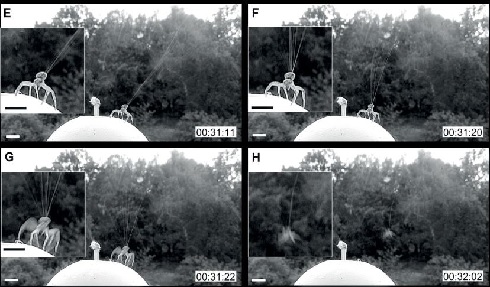 An observational study by Cho et al (2018) showed special ballooning fibres generate lift even for large spiders, and suggested spiders evaluate wind speed by raising a leg in the air first
A good example of this is the cave-dwelling Meta menardi spider here in the UK. Adult Meta are sensitive to light and specially adapted to remain in the depths of their cave, but they hang their tear-shaped egg sacs nearer the cave entrance, and from there the juvenile spiderlings make their way to the outside and balloon away while they are still small[3].

The persistence of risky ballooning behaviour in spiders means suitable patches of empty habitat do not stay empty for long. New habitat may mean less competition from kin, from other species or from conspecifics. It may also have a lower disease load if this is something that increases with population density.

Another less immediately obvious advantage is that dispersal enables individuals to find a mate with whom they are not closely related. Small populations that rarely exchange their genes with other populations suffer from what geneticists call ‘inbreeding depression’. This is the increased likelihood that an individual inherits the same faulty genetic variant from both its parents because the parents are closely related and so share much of each other’s DNA.

Long-haul flights
Many sailors report spiders being caught in sails thousands of kilometres from land,
and spiders have been detected by atmospheric data balloons at heights of nearly 5km. It is unclear if individuals that are taken on vast high-altitude journeys survive, although some spiderlings can survive without food for weeks in air currents or jet streams.

Inbreeding depression leads to congenital disorders in domesticated species such as dogs and racehorses, but the phenomenon is not confined to domestic animals and is in fact one that much of the natural world has been shaped to avoid. Ballooning spiders get round the problem of inbreeding nicely because their genes are carried vast distances by their silken sails, so the chances of two closely related individuals meeting as adults is small. The exception to this rule are social spiders, which do not appear to exhibit ballooning – their toleration of inbreeding is still a mystery, albeit one that may be resolved in this new era of genomic discovery[4].

So what actually makes a spider decide to take the risk and ‘fly’? As well as motivation from factors such as hunger or conflict, environmental conditions are known to influence the decision-making process. There must be sufficient wind (but not too much) and there are seasonal patterns to the behaviour in some species[5]. Recent work also points to the potential importance of electric fields, which are always present in the natural environment, but vary in strength according to weather patterns and topological features[6].

Other studies have found that hidden, internal microbial ‘passengers’ within the spider also moderate the tendency to balloon: infected individuals are more likely to stay where they are[7]. The microbes are themselves sometimes infected with small virus-like elements known as phage, illustrating beautifully the intricate and often unnoticed interactions between hosts and their various internal microbes that have the potential to alter host biology.

Ballooning explains spiders’ successful colonisation and persistence in the face of changing habitat availability. As described, however, the strategy can be risky because there is little control over where landing occurs. Much of our planet’s surface is covered in water and one of the biggest perceived hazards for ballooners has been the high chance of landing in an aquatic area because of the predicted inability to escape from such an environment.

Here, however, perhaps spiders’ true capabilities have also been somewhat overlooked. A study of linyphiid and tetragnathid spiders showed that some individuals are in fact capable of using their legs and silken strands to sail across the surface of fresh or salt water using a suite of behavioural strategies described as ‘sailing’[8]. 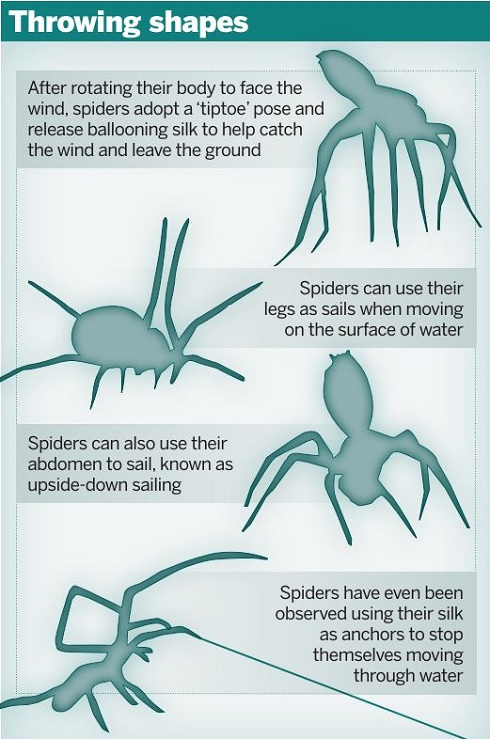 Spiders use their legs and bodies to disperse in many more ways than just crawling.

The really significant observation in this study was that not all individuals within a species seemed able to sail and that the best ‘sailors’ were those that were most likely to balloon. Ballooning and sailing thus appear to be traits that are linked, potentially because all ballooners eventually end up in an aquatic environment and only those that can sail will survive.

The best clue to what drives spider flight, with its potential for reaching far-flung places, may be what is under foot (or under their eight feet) rather than what lies in the skies above – a case of aerial exploits being less dependent on in-flight expertise and more on the aquatic skills required when the flight does not go according to plan. Together these two strategies – aerial and aquatic – likely contribute significantly to the potential for spiders to disperse long distances, maintaining connectivity between populations, and with consequences for the dynamics of many ecosystems across the globe.

Dr Sara L Goodacre is an evolutionary biologist and geneticist at the University of Nottingham. She is head of the Nottingham SpiderLab, which works on a range of evolutionary, population and conservation genetic studies using spiders as model systems. She studies spider silk genes to understand how they have evolved and enabled spiders to occupy such diverse niches across the globe.