As part of the RSB’s 10th anniversary celebrations, Sir David Attenborough was recently presented with a Lifetime Achievement Award at a special fundraising gala dinner at London’s Science Museum.

Introducing the award, the Society’s honorary treasurer, Professor Richard Reece, said that Sir David’s “distinguished storytelling” has made an enormous contribution to the field of biology. “Generations of biologists and naturalists have attributed the beginning and growth of their interest to him and the remarkable documentary work that brought the breathtaking beauty of biology to millions worldwide.”

The naturalist and broadcaster, now aged 94, is still presenting natural history programmes, with several series due to air in 2020 and 2021, including Green Planet, on plants; A Perfect Planet, on global atmospheric cycles and Earth science; and A Life on Our Planet, about Sir David’s experiences around the world. He is also one of a number of stars presenting special ‘lessons’ that the BBC will air for schoolchildren during lockdown.

Accepting the RSB’s award, Sir David said the Society was “one of the most important learned societies in the country at this time,” as he spoke of the importance of bioscience in raising awareness of the myriad threats facing the natural world.

“That’s not fancy, that’s the truth. And the population of this country responsible for electing their political leaders need to be convinced. And you are the people who do that.”

Speaking 10 years since helping launch the Society in 2009, the broadcaster said the award “will hold a special place in my heart because I do believe that biologists have a great responsibility, that you can see the future clearly, and that many of you are concerned with passing on that understanding to the next generation”.

Before accepting his award, Sir David sat down with The Biologist’s editor, Tom Ireland, to discuss his long connection to the life sciences.

Sir David, I wanted to start by asking you about the science that has supported your filmmaking over the years. Can you give us a sense of how science programmes were made at the start of your career and how things have changed?

It’s been a huge change, and not just in science programmes, or quasi-science programmes. In 1952, when I joined, a producer did everything. I mean, they wrote the camera script, directed to the studios and so on. They were very small teams and we had two small studios up at Alexandra Palace, and the programmes weren’t even filmed – they were all live. But what they produced was full of quite good science.

We started The Sky at Night, for example, and did quite tough things. I remember doing a two-hour programme about genetics. We had dancing girls, folk dancing, to show the way DNA could recombine in one way or another. We did quite ambitious things.

And by contrast, what kind of scientific team do you have for a modern series such as Blue Planet, for example?

Well, it depends. You must have some idea what the basic objective of the programme is and then you go to the appropriate scientists. It’s not only that you want to get the theory right, because presumably you watch me knowing what the theories are. You want to know what the latest examples are, or what the latest discoveries are. Where was this animal last seen?

Currently I’m doing a remake of a programme from 25 years ago, [originally called] The Private Life of Plants. So we’re doing a new version of that, because, technically, we can do it much better than we did 25 years ago. And so I’m talking to a lot of botanists. So, whatever the subject, there are scientists and they are always very helpful. 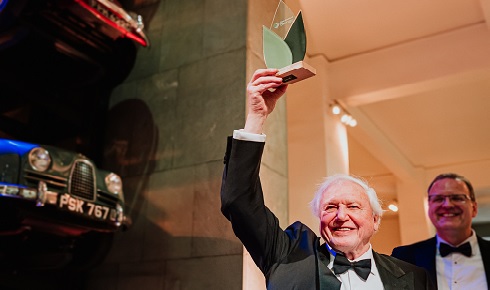 Presumably it has been a mutually beneficial relationship, with the filmmaking process feeding back insights into biology.

I would like to think scientists think it is worthwhile. I’m told that the original The Private Life of Plants, for example, caused quite a bump in the applications for botany and plant sciences. Whether it will do this again I don’t know, but certainly at the BBC we have quite serious scientific ambitions.

There are lots of times when you say to your scientists: “I don’t know what’s happening.” And then sometimes they say: “I’ve never seen that before.” Quite often, and particularly now with camera traps and so on, you’ll see things that nobody’s seen before. And, of course, with marine science, you can get all sorts of new things.

When we do interviews with RSB members and Fellows, we’ve stopped asking them who or what inspired them, because so many say the same thing – Sir David Attenborough! So I want to put the same question to you: are there any figures in the sciences who you particularly admire or have been inspirational to you?

Oh, biologists [say that]? I’m very flattered. I know who inspired me as a child: there was a wonderful man who was a ranger on the Canadian prairies called Seton Thompson – or Ernest Thompson Seton. He actually spells his name differently and he sometimes has it in different orders! He was a very good artist as well as one of the founding figures of the Boy Scouts of America. His naturalistic observations were marvellous, and he told the stories of cats, wolves and cottontail rabbits, and so on, and I found them really very touching.

That was when I was very young. But the naturalist who inspired me the most was a man called Sir Peter Scott, who really was one of the great founders of the conservation movement. I mean, his name ought to be on everybody’s lips now because he was the first person to really start talking about the dangers of what we were doing to the natural world. He was the first person to say that we had to take the proposition that we could exterminate species very seriously. He was a great man. 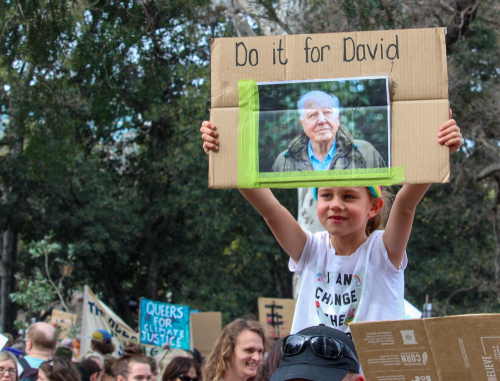 Sir David and his programmes have inspired many people's interest in the natural world, including many RSB members.

You’ve become an expert naturalist and zoologist yourself through your filmmaking. What were you like as a natural sciences student? Before you worked in television, did you imagine a career in science or academia?

It’s kind of you to say that, but I took a wartime degree. And that meant that I only went to university for two years and then I had to go into the Navy. So I’m half-educated.By the time I came out I was in my 20s and reckoning that I didn’t want to go back on a grant – I wanted to earn a living and get out there and do things. And I didn’t think I was suited to being a research scientist, looking at the same thing, all the time, with a dedication that I much admire but don’t share. And so I got a job that was grandly called a science editor at the University of London Press.

However, it was no such thing – it was books for kiddies, crossing commas out of manuscripts on tadpoles. And from there I went to work for the BBC.

Your incredible career has put you in quite a rare position in that you’ve seen many, many environments and ecosystems over many, many years. For a lot of people, climate change and biodiversity loss are just figures on a graph or headlines in the newspaper. What sort of changes have you seen with your own eyes?

Well, I’ve been to South Georgia, where 10 years earlier there was a glacier and there’s now just an earth valley. I suppose the most dramatic thing I’ve seen is going back to a coral reef from northern Australia, which I knew before was full of life, and seeing a graveyard of white coral. That is certainly one of the pretty devastating sights.

Just to keep it in balance, I’ve also been to Rwanda where we filmed mountain gorillas 20 to 30 years ago when they were on the verge of extinction. Now there are twice as many mountain gorillas in the world as there were when I was seeing them. So it can go both ways.

Going back to the theme of the evening, which is the celebration of the last 10 years in bioscience, what aspects of biology and life sciences, particularly interest you?

I suppose I’ve been so overcome by concerns about what is happening to the climate and the planet that pure science has taken a back seat so to speak. But epigenetics, I must say, is something that interests me very much. After all, it fairly hits at the foundation stones of quite a lot of biological sciences. And I wish I had done more reading on it myself.

If someone said to me I’d like to do a programme on epigenetics that would be a good chance to get down and not just forage around the edges, but actually get out to do something serious. It does strike me as potentially a game changer.

However, the overwhelming thing for me is the environmental sciences. The consequences of climate change is the thing that dominates one’s thoughts all the time. This is not abstract science – these are urgent, urgent issues that we need to deal with.

Well, David, congratulations on your award tonight. And thank you very much for your time, and for all your work raising the profile of the wonderful world of biology.

Thank you very much.

Find out more about the RSB's 10th anniversary fundraising event with Sir David Attenborough at the Science Museum.