Spider silk is the toughest known fibre: its physical properties can outcompete natural and synthetic materials, including bullet-proof Kevlar and high-tensile steel. Silk is resistant to chemical degradation by solvents and strong acids and bases, and its biodegradation rate is slow. Besides its phenomenal mechanical traits, spider silk shows excellent biocompatibility in mammals, making it an ideal material for biomedical applications[1].

The reason we cannot buy spider silk-based plasters and bandages at the local pharmacy is the scarcity of the material. Unlike silkworms, spiders are highly territorial and cannibalistic, which rules out high-density farming for an industrially relevant silk supply. To illustrate just how difficult it is to obtain spider silk, in 2009 artists Simon Peers and Nicholas Godley presented the world with the first and only piece of clothing made entirely of natural spider silk. It took 1.2 million wild golden orb-weaver spiders (Nephila clavipes), more than 80 people and three years of labour to produce four metres of fabric[2]. 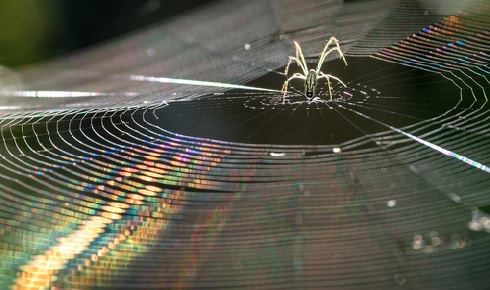 Fantastic silks and how to spin them

Natural spider silk is composed of large (>250kDa), repetitive and insoluble proteins called spidroins. Spidroins are stored within the silk glands and form an extremely concentrated fluid (known as spinning ‘dope’) equivalent to 40 grammes of protein dissolved in 100 millilitres of water. The spider forces the dope out of the glands through an S-shaped duct that actively acidifies and dehydrates the protein solution. Finally, the silk thread exits the spider at the spinneret or the cribellum (depending on the spider species). Spiders make seven types of silk, each spun from a single type of spidroin, from scaffolding silks to glues and silks to capture prey or wrap eggs.

To study natural silk genes, researchers explore the spider genome or extract glands from the spider’s abdomen and study the cells’ transcriptome (the RNA intermediates between genes and proteins).

The best-researched model silk is dragline silk, made up of the major ampullate spidroin (MaSp). MaSps are composed composed of hundreds of core repeats of glycine-rich and polyalanine blocks that are responsible for silk’s mechanical properties. This core unit is flanked by highly evolutionarily conserved domains that ensure the solubility of silk at high concentrations in the storage gland and help with fibre formation. Most spidroins have a similar modular nature. 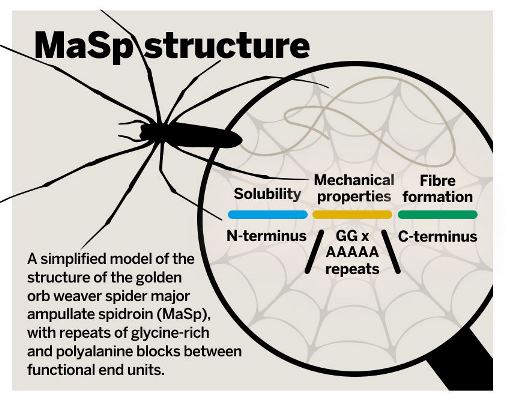 The mechanical properties of silk spidroins like MaSp come from repeating units of glycine-rich and polyalanine blocks. These core repeats are flanked by domains at either end that ensure the solubility of silk at high concentrations in the storage gland and help with fibre formation.

Synthetic biology has enabled scientists to replicate the genetic blueprint of spider silk and insert it into a non-native organism, usually a microorganism. The goal of this effort is simple: to make large amounts of spider-free (recombinant) spider silk, sometimes by the kilo or maybe even the tonne. Recombinant silk production removes most ethical and biosafety concerns about animal involvement in the manufacturing process, making it more sustainable and helping to avoid potential species-jumping pathogens.

Protein scientists rarely put full-size silk genes in a microorganism. Spidroins are too large and repetitive for the microorganisms’ cellular machinery, which gives up translating long genes because their native proteins are significantly smaller (averaging 30–40kDa). Instead, protein designers utilise silks’ modular nature to mix and match domains from different spidroin types or even different spider species, making a customised silk for the desired application.

Miniature synthetic silks replicate the biocompatibility of their naturally occurring counterparts[3]. The mechanical properties of mini silks are directly proportional to the length of their repetitive region, and full-size synthetic silks are as strong as those that come from a spider[4].

After the synthetic silk gene is designed by mixing and matching the protein domains of interest, biotechnologists insert it into the microorganism using electrical or heat shock. Unlike spiders, microorganisms are not picky in their diet and can survive solely on sugar, salt and a nitrogen source – a great prospect for circular economies. The host culture grows to an extremely high density in bioreactors, which regulate the acidity and temperature of the culture, and supply enough air and food. Then, with the addition of a chemical inducer, such as a synthetic lactose analogue, the bubbly, syrupy microorganism soup is forced to make silk proteins.

Overnight, the microorganisms pack themselves full of silk. The host cells are then popped open using soap or ultrasound, and the synthetic silk is separated from the debris using salt precipitation, protein chromatography or electrostatic interaction. 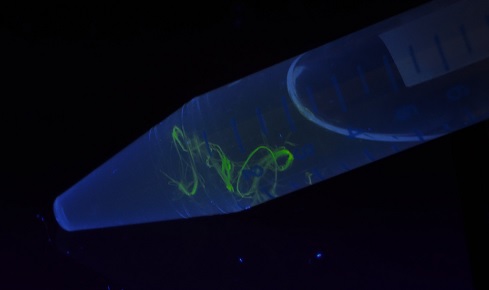 The diversity of synthetic silks

While natural silks exist in nature exclusively as hardy, insoluble fibres, synthetic silk production gives access to meaningful amounts of soluble silk protein. This solubility is a critically important feature because it enables researchers to fine-tune the morphology of the final silk product. For instance, soluble synthetic silks can be processed into self-assembling and chemically stable films (or coatings), as well as nanoparticles and gel-like structures[1].

To add a layer of functionality to these physical and morphological properties, protein engineers genetically or chemically fuse synthetic silk with other, biologically active molecules. In the genetic approach, silk fusions with another protein are called chimeras. For instance, silk and cell adhesion motif chimeras support stem cell growth culture[5], and silk-antimicrobial peptide chimeras act as highly selective antimicrobial materials[6].

In the chemical approach, silk fusions with another molecule are called conjugates. Usually, chemists make conjugates by attaching molecules to a protein’s naturally reactive amino acids, such as cysteines, which can be tricky and detrimental to spidroins’ ability to form fibres.

To avoid exploiting natural amino acids that play a critical role in maintaining the protein structure, unnatural amino acids with selectively reactive side chains can be incorporated into the silk sequence and then used as sites for conjugation. In 2017, Harvey et al reported the first-ever spider silk bearing an unnatural amino acid azidohomoalanine (AHA) instead of methionine. The researchers processed AHA-bearing silk into fibres and conjugated them with levofloxacin, a broad-spectrum antibiotic, thus creating the first prolonged-action antibiotic-delivering spider silk[7]. 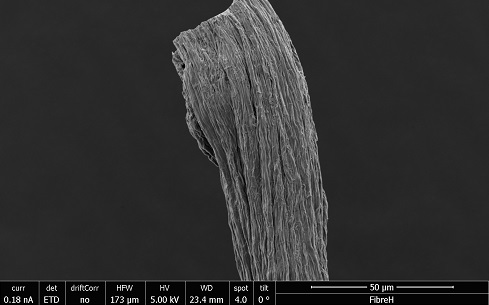 Spider silk beyond the laboratory

The bioindustry has noticed the huge potential of spider silk as a novel material and several silk technologies are currently available.

Companies such as Spiber (Japan), Bolt Threads (US), AMSilk (Germany) and Inspidere BV (Netherlands) manufacture spider silk for clothing, biocompatible medical devices and beauty care. In 2017 Bolt Threads, in collaboration with fashion designer Stella McCartney, created a dress made entirely of synthetic spider silk produced in yeast. The price of this dress is unknown, but a tie made of the same material, Microsilk, costs $314 (£253). Swedish company Spiber Technologies uses silk protein to help stem cells to adhere to surfaces and grow in cell culture.

Overall, spider silk has the potential to replace animal-derived materials such as keratin, gelatine and elastin. Future work will focus on developing and testing novel functional silk materials, such as antimicrobial coatings, protein-based heart pacemakers, bone scaffolds and much more. Synthetic spider silk is a truly inspiring material.

Jolanta Beinarovica AMRSB is a Biotechnology and Biological Sciences Research Council-funded spider silk biotechnologist at the University of Nottingham. Her research focuses on the design of synthetic silk-based antimicrobial biomaterials. She can be found on Twitter @BlackWidowJola