It’s easy to feel helpless amid news of alarming global species loss, but small steps taken by gardeners can have a big impact on soil health, biodiversity and wildlife, writes Professor Geoff Dixon

Collectively, gardens – including home plots, allotments and community enterprises run by neighbourly groups – cover about 526,000 hectares in the UK[1]. They are enjoyed by 17.6 million owner-occupiers in a total of 27.9 million dwellings[1]. Actions aimed at conserving and increasing natural biodiversity by even a minority of gardeners will over years produce significant benefits, particularly in urban and suburban areas, where most people live.

When acquiring a new garden or renovating an old one, the first step is reviewing the need for or presence of hedges and lawns. Well-maintained hedges are far more beneficial than walls or fences. The latter are impermeable barriers that wind moves over, descending in damaging eddies some distance from the solid structure[2]. Hedges, on the other hand, will filter wind, reducing its force and subsequent damage. Hedges also provide habitats for birds, supplying foodstuffs such as berries or insects, winter shelter and springtime nesting sites for small songbirds such as tits, robins, sparrows, blackbirds and thrushes. Hedges will become natural biodiverse communities. 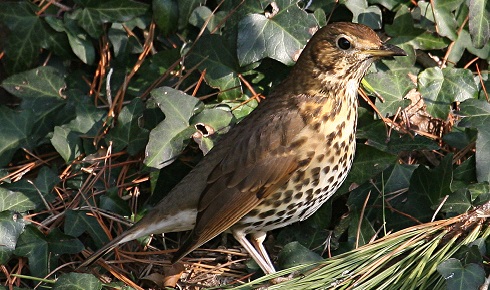 Hedges are biodiverse areas providing food and shelter for birds such as this song thrush (Turdus philomelos).
Despite falling out of favour with some naturalists, grass lawns serve important purposes for our recreation and relaxation, and provide natural drains for heavy rainfall. Digging over, clearing builders’ residues, adding manure or compost and grassing down is a valuable first step with any new garden. The fibrous rooted mat of grass starts building soil structure and fertility, and the establishment of white clover colonies in lawns will attract both wild and honey bees. From that lawn a satisfying design of flower borders, shrubs, trees and vegetable beds can be laid out.

The birds and the bees

Where gardens have large expanses of grass, gardeners can experiment by establishing native meadowland wild flowers such as fritillaries, orchids, cornflowers, poppies or oxeye daisies. Here, small mammals such as moles and hedgehogs, and slow worms (legless lizards) can be encouraged. Some homeowners encourage the presence of larger mammals such as foxes and badgers by offering entry holes in boundary fences.

Thoughtful gardeners can also leave a log or tree stump in situ to provide shelter for populations of insects and other invertebrates. A garden pond can be a site for breeding frogs and toads, and host even more invertebrate life, although such features need guarding if the family has young children. These initiatives are very rewarding for both natural biodiversity and the owner, but do require sufficient space and skilful gardening.

Attracting bees should be a priority in any garden, no matter how small. Providing food sources for insects such as bees, wasps, butterflies and moths is a critical first step: ornamental and edible fruits such as cherries, pears, plums, apples, quince and medlars add valuable garden beauty, while also attracting pollinating insects and a diversity of birds. 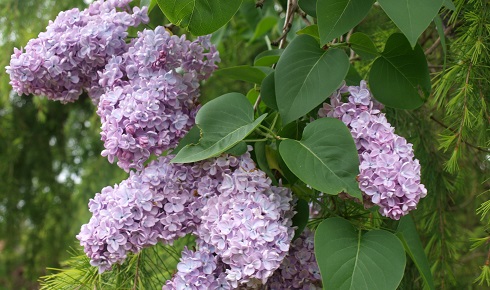 Thoughtful seasonal gardening can provide year round flowering for pollinators.

Gardeners can amplify these benefits by establishing a range of flowering and fruiting shrubs. Garden size will govern what is possible, but a simple sequence could include winter-flowering Viburnum farreri or wintersweet (Chimonanthus praecox), followed in spring and early summer by Deutzia scabra, Spirea arguta, various lilacs (Syringa) or Buddleia, which attracts butterflies. Doubly beneficial are Cotoneaster francheti and firethorn (Pyracantha coccinea), which flower in mid-summer and then produce copious berries that provide autumn and early-winter food for migrant birds such as fieldfares and redwings, as well as resident blackbirds.

Planting a garden that flowers from early spring to winter boosts its contribution to both natural biodiversity and family enjoyment. The range of flowering annual, biennial and perennial herbaceous plants and bulbs that provide beauty and biodiversity in gardens is enormous. Another selection could include early-flowering grape hyacinths (Muscari armeniacum), which are good food sources for bees; hardy annuals such as Scotch or pot marigold (Calendula), whose roots valuably exude chemicals antagonistic to soil-borne pests; half-hardy annuals such as Livingstone daisy (Mesembryanthemum), which attracts both bees and butterflies; and grasses such as Brizia maxima or Pennisetum villosum, which produce seeds for birds. Bee houses and honeycombs can also be placed around the garden to provide shelters for bumblebees and other wild species. 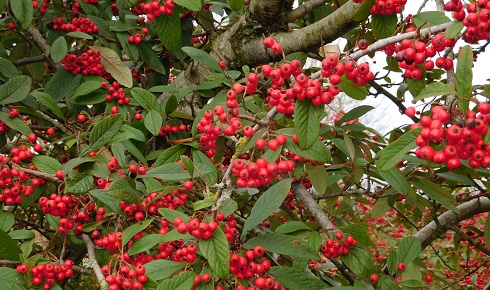 Cotoneaster francheti provides berries for migrant birds such as fieldfares and redwings.

Alongside the air we breathe and water we drink, soil is a vital and irreplaceable natural asset. That thin layer of ‘dirt’ is a living entity[3] that supports the roots of all the forests, grasslands and food crops essential for our survival and the rest of the natural world. Yet half of all the planet’s topsoil has disappeared in the last 150 years and one third of the current land is severely degraded[4]. Abuse is acute in urban and suburban areas due to commercial land development. However, informed soil husbandry by individual gardeners and community groups can redress some of this damage.

Health and quality are the two most important biological characteristics of soil. The key measure of soil health is biodiversity, while quality defines its capabilities for supporting healthy plant growth[5]. High-quality, fertile soils result in high-quality, healthy plants. As a bonus, crops grown in highly fertile, healthy soils require less irrigation during periods of dry weather[6].

Beneficial soil microbes degrade organic matter and are integral parts of the carbon cycle; other bacteria have roles in fixing atmospheric nitrogen; and several fungal microbes develop symbiotic mycorrhizal partnerships with roots, making phosphates more easily available. In fertile soils destructive plant pathogenic microbes are in a minority because of the biocontrolling properties of beneficial microbes. 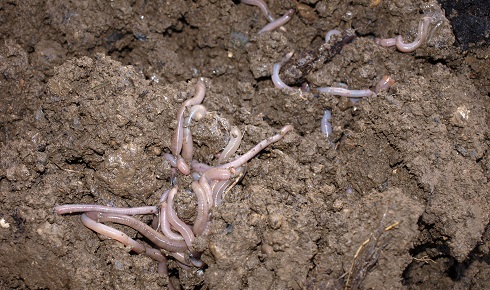 If gardeners can raise soil health and quality, they can increase its biodiversity and productivity. Continual addition of organic matter such as farmyard manure or well-rotted compost increases the size and diversity of microbial populations. Soil particles become bound together into water-stable aggregates[7]. That improves soil tilth – the productive balance of aggregate sizes, pore spaces and water percolation. Good tilth provides in equal proportions oxygen for root respiration and scope for their penetration, while retaining adequate soil moisture for uptake. Excess water from rainfall or irrigation drains through fertile soils.

Digging is a valuable process for gardens. Inverting soil buries weeds and encourages the valuable effects of frost for producing fertile tilths and improving drainage. Frost also diminishes populations of pests by directly killing larvae or exposing them for predation by birds such as robins, thrushes and blackbirds.

Finally, alliums such as onions and leeks form extensive roots that exude secondary organic molecules, providing natural biological control of some pests and pathogens. Deep-rooting crops such as carrots and sweetcorn penetrate through soil, increasing aeration and channels for drainage water.

When taking on a new garden, assessing soil structure and texture is good practice[8]. Structure describes how well soil particles are aggregated. Aggregation produces soil with a fertile tilth without the presence of large clods, delivering adequate oxygen for root, macrobe and microbe respiration, and water for cellular processes. Texture describes the physical content of soil – that is, whether it is inorganic soil formed from the breakdown products of the underlying rock strata or an alluvial soil made up of silt particles from soil transported by water from the surrounding landscape. 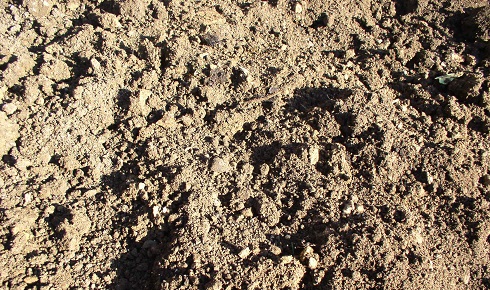 Improving soil structure is best achieved by continuous cropping. One helpful technique is sequencing by growing early- mid- and late-season crops. Early-season legumes can be produced as over-wintered crops and followed by transplants raised under glass. These are succeeded by transplanted lettuce and frost-sensitive plants such as sweetcorn and courgettes. Finally, the land is filled with winter vegetables such as leeks as plant breeders have developed cultivars capable of maturing from late autumn through into early spring. Cover crops generally reduce nutrient leaching, suppress weed growth, increase earthworm activity and ultimately raise crop productivity[9]. Agricultural legumes such as red or white clover will stifle weeds, increase soil nitrogen reserves and support populations of bees and butterflies.

Redressing lost biodiversity and mitigating climate change are the responsibilities of individuals as well as communities and countries. Accepting these challenges requires understanding, initiative and effort. Gardening is part of many people’s lifestyle and approaching it as a way to aid and support nature can cumulatively bring about substantial benefits. Even small urban gardens will, with careful and sensitive husbanding, help improve the health of the natural world.

Professor Geoff Dixon FRSB is author of Garden Practices and their Science and a past vice-president and chairman of the Agricultural Sciences Committee.