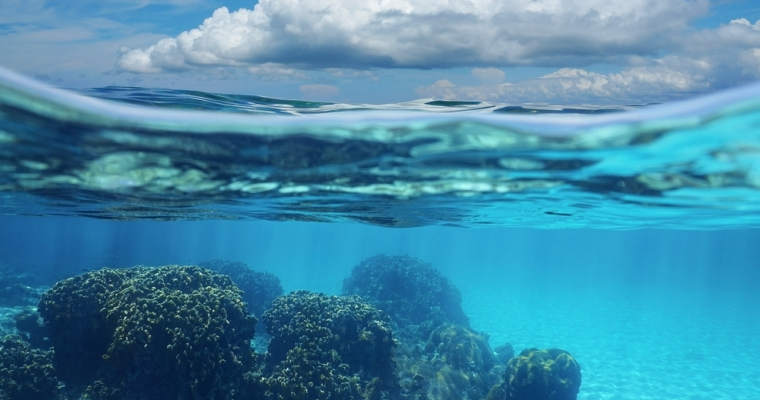 A technique known as ‘microfragmentation’ can help slow-growing coral grow up to 40 times faster than in nature. Zac Forsman explains how the technique could help restore colonies impacted by climate change and mass bleaching events

Corals are very odd organisms. They are part animal (the coral host), mineral (the bone-like skeleton they secrete), and vegetable (the symbiotic algae that lives in their tissues) all at the same time. Most reef-building corals are composed of a colony of thousands of interconnected individuals that look like upside-down jellyfish with tiny mouths and small stinging tentacles that feed on plankton.

As with trees in a forest, thousands of species depend on corals, including up to an estimated 25% of all marine fish. They also produce sand for building beaches and dampen waves, protecting coastal infrastructure from erosion and flooding.

Coral reefs around the world have collapsed in recent decades as a result of how we have altered the environment: erosion and sedimentation from poor land practices and coastal development; pollution and runoff from industrial agriculture and sewage; overharvesting of herbivores resulting in algal overgrowth; dredging and anchor damage; and, to add insult to injury, global warming and ocean acidification from ever-rising CO2 emissions.

When temperatures rise above an average threshold at a particular reef, corals expel the algae in their tissue and appear stark white. Known as mass coral bleaching, these events are spreading like wildfire across our oceans and are occurring with increasing frequency year after year as global temperature records keep breaking.

Bleached coral has an increased chance of death by starvation and disease. However, some corals and some entire reefs are surprisingly resilient. Why are some corals and some geographic regions more resilient than others? Can we plant corals in much the same way as we plant trees on land to slow or reverse the decline of coral reefs? Researchers need new tools to answer these and other basic questions about coral biology and that was the motivation behind the development of a technique known as microfragmentation.

Dividing a coral colony up into small fragments results in genetically identical pieces. For a researcher, this is like cloning a lab rat into as many copies and sizes as is needed for an experiment. I began working with this technique in 2003 at the Waikiki Aquarium in Hawaii to see if we could build an effective coral nursery. Corals, again like trees, produce many thousands of offspring with very low survivorship – once they grow large enough they are far more likely to survive.

The key concept behind a coral nursery is that conditions are created to reduce the high mortality rates that are often seen for the tiny and vulnerable. With the right conditions we could grow coral fragments as small as five polyps (~5mm in diameter) with high survivorship[1]. An unexpected byproduct of this work was an observation that corals do a very weird thing when they are fragmented in small (~1cm2) pieces: they start to rapidly grow a thin sheet of tissue in two dimensions over a substrate. 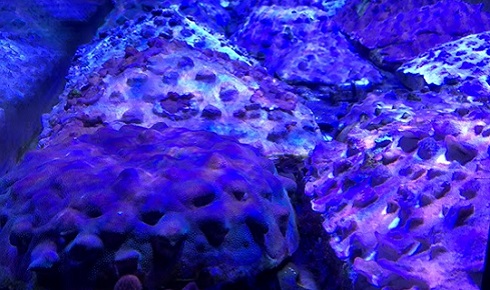 This rate of growth is up to 40 times the growth rates typically observed in nature and if small fragments are placed in an array, they can fuse together and form a large colony in a few months. This means that starting with a baseball-sized piece of coral you can grow a basketball-sized piece in about four to six months. Dr David Vaughan and Chris Page, working at Mote Marine Laboratory in Florida, independently discovered the same phenomenon, and we compiled observations of massive ‘slow growing’ corals from the Atlantic and Pacific Ocean growing surprisingly rapidly using this method[2].

In 2008 the discovery of microfragmentation and fusion caught the attention of resource managers in Hawaii, who were looking to estimate damages for the grounding of the 20,000-tonne cargo ship MV Cape Flattery, which levelled about 20 acres of coral reef. In order to estimate damages they needed to know how much of the reef could be restored at that particular site using the framework of the national resource damage assessment process, as evaluated by the National Oceanic and Atmospheric Administration. 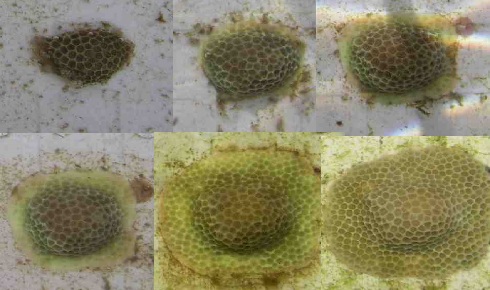 Microfragments of the coral Porites lobata growing over four months in a
land-based coral nursery tank at the Waikiki Aquarium (modified from Forsman et al, 2006)

I wrote a proposal to estimate how much coral a land-based nursery could produce using microfragmentation. In 2013, after several additional ship groundings, large spills and harbour projects, I was hired by the State of Hawaii Division of Aquatic Resources (DAR) to build a land-based coral nursery, located at Anuenue Fisheries Research Center (AFRC), next to Honolulu Harbor. After three years of very hard labour, and with great help from the AFRC staff, the DAR Coral Restoration Nursery had a grand opening.

The nursery uses corals that would otherwise have been lost as starting material. All corals go through an extensive quarantine procedure to remove parasites and disease, and the facility has large outdoor tanks that use a siphon surge mechanism to simulate wave action, as well as indoor tanks with highly controlled temperature, pH and lighting conditions. Most importantly, the facility has well-trained staff who have lots of experience in coral husbandry. The facility has focused on mass production of coral modules ranging in size from 20cm (basketball sized) to around a metre wide.

Microfragmentation and colony fusion are flexible tools for reef restoration. In Hawai‘i the DAR Coral Restoration Nursery first used plugs and tiles, but more recently has moved directly to concrete modules and is currently increasing capacity to produce hundreds of these per year.

The Florida Keys Mote Marine Laboratory has been using the microfragmentation method to produce thousands of coral plugs that can be fused together, or transplanted and epoxied directly onto large dead coral colonies. The corals then spread tissue, effectively ‘reskinning’ endangered species of coral and bringing 100-year-old colonies back to life[3].

Direct transplantation of small fragments onto the reef can, however, result in predation of the small colonies by parrotfish in some environments[4]. Interestingly, larger fragments suffered less predation by parrotfish, which could indicate that small fragments invest less energy in chemical defence and more resources in rapid growth. There may also be trade-offs between size and reproduction because fragmented colonies have less chance of reproduction. However, it might be possible to speed up the time to first reproduction using microfragmentation and fusion if reproduction is dependent on size and not age.

Corals that have gone through the microfragmentation and fusion process have been observed to spawn, so the process does not seem to have a detrimental impact on the corals’ life cycle. Additional work is needed to determine if the time to first reproduction can be accelerated.

In Israel researchers investigated whether microfragmentation and fusion can be used to ‘tile the reef’ as an engineering tool to reverse degradation of coral reefs, perhaps even as a method to go from a reef dominated by algae to one dominated by coral, reversing the typical ‘phase shift’ to algal dominance[5]. Could the microfragmentation and fusion method be used to cover large structures such as artificial reefs and breakwaters? If mass production and careful ecological engineering principles are applied, ‘living breakwaters’ could transform grey infrastructure into self-repairing ‘green’ or ‘blue’ infrastructure[6]. 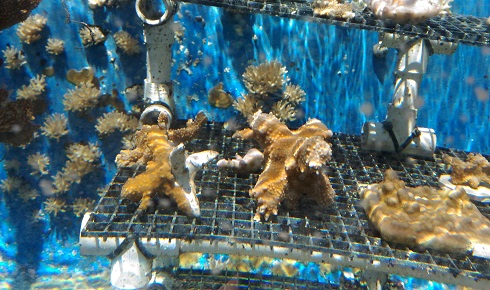 Diving and physically attaching coral to the substrate with epoxy, concrete or other methods is one of the most expensive components of reef restoration. Small ‘coral seedlings’ are being explored that would fall into cracks and crevices and grow without needing to be planted, or roll and grow until they self-attach[7,8,9]. Corals use a similar method to reproduce and disperse in nature, with some colonies growing tissue on all sides (known as coralliths), which roll and grow until they self-attach and become part of the reef.

Researchers have already had success with small units that can be scattered on the reef and wedge into cracks and crevices, taking a fraction of the time to plant corals with a five- to 18-fold reduction in outplanting costs[10]. The study used tiny corals settled from larvae and, unfortunately, survivorship was very low (~7%), but the method could be combined with microfragmentation to rapidly increase colony size and increase survivorship. Of course, in addition to any of these methods, to ensure the health of the world’s reefs the fundamental drivers of reef decline also need to be addressed.

Microfragmentation can be used as an assay tool to measure growth and survival, helping to determine which corals grow where and why. We have begun using microfragment assays to identify which sites are more suitable than others for coral transplantation and to identify the causes of mortality. We are also using these assays to learn about which coral species and coral genotypes are resilient to coral bleaching and which are not, and to try to understand more about coral biology and restoration ecology. 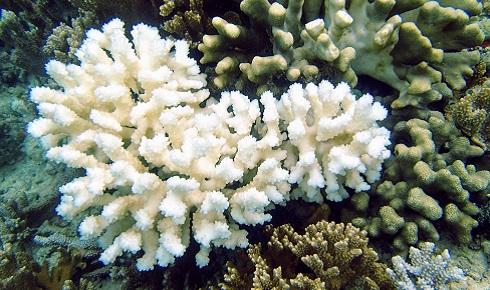 Dr Zac H Forsman is a researcher at the Hawaii Institute of Marine Biology. His interests include conservation genetics and genomics of rare species, coral reef ecology, coral cultivation and coral reef restoration.