Investigating rock pools is one of the great ways to introduce people to the wonders of nature, write Julie Hatcher and Steve Trewhella

What can beat exploring the cool depths of a rock pool, with the waves gently lapping close by, the sun shining down and a fresh sea breeze cooling the air? It is often one of the earliest and most memorable introductions to the natural world for children and can arouse a lifelong passion for wildlife. The sights, sounds and scents of the seashore stir the senses and lift the soul.

Rock pools are fleeting windows into the underwater world which appear when the tide retreats, leaving behind pockets of seawater trapped in the dips and hollows of the seashore. They offer a vital refuge for animals temporarily isolated from the sea – oases of cool and shade for marine animals and plants in a desert of open, unsheltered rock. 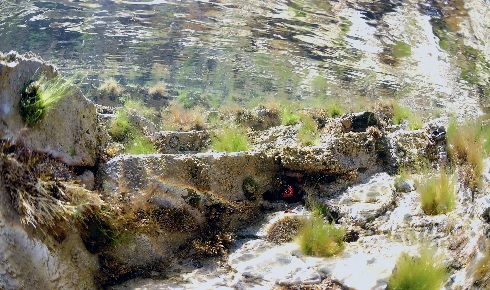 A shallow rockpooll, by Steve Trewhella.

For creatures caught out by the ebbing tide they offer a short-term sanctuary, but they are a permanent home for others. As the tide returns they will be once again swallowed up in the vast expanse of salt water, as if hidden beneath a heavy cloak and obscured from view.

The diversity of life found in rock pools and on the surrounding seashore is astonishing, but also accessible if you know where and how to look. Some species are obvious and open, others conceal themselves beneath rocks and boulders, while many use camouflage and other techniques that render them all but invisible. Knowing how to reveal these animals can open up a whole new perspective of coastal areas and help introduce people to wildlife that is rarely noticed.

Rockpooling equipment
Kit to help you make the most of your excursion:
• Buckets, pots and trays to temporarily hold your catch for identification
• Small, short-handled aquarium net (long-handled nets from seaside shops can be destructive in rock pools)
• Head-band magnifier or hand lens
• Camera (ideally with a waterproof case)
• Knee pads or a kneeling mat (for comfort)
• Notepad and pen
• Drink – in a refillable bottle

All rock pools and rocky shores are worth investigating. While the rugged coasts of Cornwall with its deep ‘classic’ rock pools may be assumed to hold more life and biodiversity than elsewhere, this is not always the case. The chalk pools on the east coast, and even sheltered harbours and sea lochs, can hold an array of wildlife. Even a few rocks on a sheltered muddy foreshore can reveal a wealth of life growing on them or living under them.

You can rockpool in most conditions, but obviously being on an exposed shore during rough weather is not to be advised. We normally follow the tide out, as various zones become exposed as it retreats, giving more time on the shore.

Of the many groups of species that make their home on rocky seashores, the most obvious are algae. Capturing the sun’s light by photosynthesis, seaweeds are the base of coastal food chains and provide not only food but a home for many animals, as well as an attachment point for other algae where bare rock is at a premium. Grouped arbitrarily into greens, browns and red seaweeds, depending on colour and the different pigments they contain, they can blanket the whole seashore in sheltered locations. 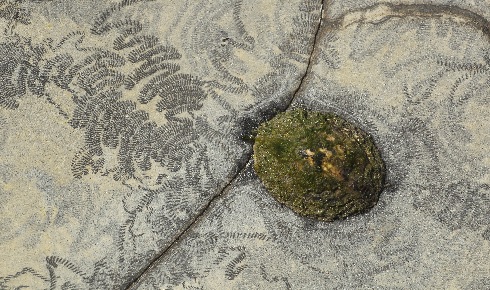 The tracks of a common limpet. Image by Steve Trewhella.

The dominant group on seashores are the brown seaweeds, particularly a family called the wracks, which arrange themselves in bands – from the small channelled wrack (Pelvetia canaliculata) of the upper shore, through the familiar bladder wrack (Fucus vesiculosus) of the middle shore and down to serrated wrack (Fucus serratus) on the lower shore. Channelled wrack is adapted to cope with the drying effects of sun and wind, spending the majority of its life above the tide; serrated wrack on the other hand spends only a few hours out of water each day.

A blanket of seaweed offers shelter from sun, wind, rain and predators for many animals that prefer the cool, dark, damp conditions beneath. Even as the upper surface of the blanket dries to a crisp, the underside remains moist, providing a lifeline for many species for the duration of the low tide.

The easiest animals to spot here are the sea snails. These molluscs, tucked away in their tough shells, many with a hard, watertight ‘door’ or operculum that can seal them inside, wander beneath the canopy in relative safety, feeding, mating and laying their eggs. Their shells come in myriad colours and shapes, from bright yellow periwinkles to pink, candy-striped topshells. Sheltering alongside these are a variety of animals including fish, crabs, sea anemones, isopods, sponges and seasquirts, to name but a few. 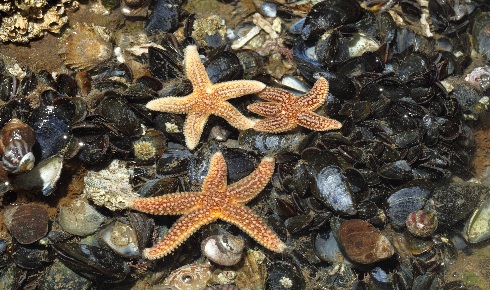 Between a rock and a hard place

On seashores facing the wild Atlantic Ocean, where pounding waves can break with incredible force, it is difficult for all but the toughest algae to survive. These shores are dominated by densely packed animals that cling tightly to the rock. Barnacles cement themselves to the rock and shut themselves away inside their shells, while mussels send out incredibly strong guy ropes called byssus threads to anchor themselves to both the substrate and one another.

On certain shores, where just the right water currents and grade of sand are found, incredible structures are created by honeycomb worms. These can build high-rise residences of up to several feet tall, made of a multitude of tubes stuck together with sand grains and mucus.

The seashore code
Exploring rock pools is an absorbing and fascinating pastime, but it is important to remember these places are homes to many species and as such must be treated with great care and respect.
Always follow the Seashore Code...
• Return rocks and seaweed exactly as you found them. They provide vital shade and shelter.
• Watch where you walk to avoid trampling seaweed and creatures hiding beneath it.
• Leave attached animals and seaweed where they are. Limpets, anemones and algae may not survive if removed.
• Handle animals gently and with wet hands.
• Return all animals to the spot in the pool where you found them. They may be guarding eggs or territory.
• Take all your litter home as well as any other litter you find.

Limpets may be the most overlooked of all rock pool wildlife, and yet they have a pivotal role to play. These molluscs cling tenaciously to rocks at low tide and rely on the watertight seal around the edge of their shell to save them from desiccation. If dislodged, the seal is broken and they may dry out and die before the tide returns.

Limpets’ night-time or high-tide meanderings can be followed in the form of zigzag tracks left behind after each foraging trip (see image, above). The molluscs graze on the film of detritus and algal spores ‘painted’ on to the rocks by each tide. In doing so they control seaweed growth, creating a mosaic of bare rock where barnacles and mussels attach alongside seaweed-covered rock where crabs and snails shelter. So the seemingly humble limpet is responsible for increasing the biodiversity of rocky seashores.

As you sit quietly beside a mirror-calm rock pool, allow your eyes to penetrate the surface reflection and focus on the submarine world beneath. Eventually, once your eyes have adjusted, you may be able to make out a pair of eyes returning your gaze.

The likelihood is that these belong to a shanny (Lipophrys pholis), a small fish that is often found in the open at the bottom of rock pools, secure in its camouflaged skin, which can change colour to blend in with its surroundings. They have large eyes, strong jaws, a permanent grin and fins under their chest designed to prop them up for a better view of what’s going on in their home patch. They are the most common and most extrovert of a variety of rock pool fish, including the rock goby and shore clingfish (family Gobiesocidae). 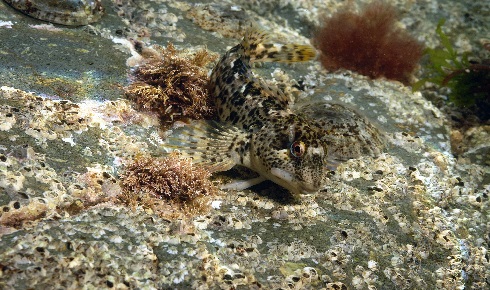 Lipophrys pholis, known as a shanny, is commonly found attempting to blend in on the bottom of rockpools. Image by Steve Trewhella.

Perhaps the most iconic rock-pool creature of all is the starfish. These slow-motion predators, with no eyes or head, or even a front or rear end, use hydraulic pressure to prise open bivalves and feast on the contents. It is always a delight to find these animals in rock pools. Most often you will find the familiar, orange-coloured common starfish (Asterias rubens) or the tiny blue cushion star (Culcita novaeguineae), but look out for the sunstars (such as Crossaster sp.), which prey on other starfish, and their thin-limbed relatives, the brittlestars (Ophiuroidea).

For every child, the ultimate rockpooling prize is a crab. Is it the stalked eyes, nippy claws or sideways scuttling that make them appear even more alien than most other marine animals? Although they are the definitive rock pool creature, they still have some surprising secrets to reveal. Did you know, for example, that they taste with their hairy legs, moult their hard exoskeleton as they grow and can even regenerate lost limbs?

A handful of recent non-native introductions and the rediscovery of St Piran’s crab (Clibanarius erythropus), thought to have been lost following an oil spill in the 1960s, show that there are surprises yet to be found by rockpoolers. In fact, with climate change rapidly altering the ranges of common species, and non-natives taking hold on our shores, it has never been more important to explore the rock pools and beaches on our coastline.

Steve Trewhella and Julie Hatcher are naturalists based in Dorset. Trewhella is a professional wildlife photographer and Hatcher works in marine conservation. Their new book, The Essential Guide To Rockpooling, is out now via Wild Nature Press.