Cases of a bizarre allergy to products made from mammals – including red meat, woollen clothes and some medicines – are on the rise. Maryn McKenna explains how researchers are piecing together the puzzle of its unlikely cause

It is early morning and I am tracing my way through the woods of central North Carolina to meet Tami McGraw when she emails about what we could eat when I arrive. “Would you like to try emu?” she asks. “Or perhaps some duck?”

McGraw is allergic to the meat of mammals and everything else that comes from them: dairy products, wool fibre, gelatine, char from their bones. Wearing a wool sweater raises hives on her skin and even the fumes of bacon sizzling can cause an allergy attack.

Everywhere she goes she carries an array of tablets and an auto-injecting EpiPen that can jolt her system out of anaphylactic shock. This syndrome affects thousands of people in the US and an uncertain number worldwide. After a decade of research scientists are just starting to understand what causes it: the bite of a tick.

The illness, which generally goes by the name ‘alpha-gal allergy’ after the component of meat that triggers it, is a burden that McGraw and her family are still learning to cope with. For scientists alpha-gal is forcing a remapping of basic tenets of immunology: how allergies occur, how they are triggered, who they put in danger and when.

The story of how the allergy was discovered begins with a cancer drug called cetuximab, which came on to the market in 2004 and is grown in cells taken from mice. In early trials one or two of every 100 patients had a hypersensitivity reaction. That 1–2% stayed consistent as cetuximab was given to larger and larger groups.

Then, in clinics in North Carolina and Tennessee, 25 out of 88 recipients were found to be hypersensitive to cetuximab, with some so ill they needed emergency shots of epinephrine and hospitalisation. Around the same time, a patient receiving a first dose of cetuximab in a cancer clinic in Bentonville, Arkansas, collapsed and died.

The manufacturers of the drug could find nothing about those particular trials that stood out. Fortunately, a nurse whose husband worked at the Bentonville clinic mentioned the death to Dr Tina Merritt, an immunologist in private practice nearby. Merritt had just finished postgraduate training at the University of Virginia’s allergy centre and she in turn discussed the death with her former supervisor, allergy researcher Dr Thomas Platts-Mills.

Platts-Mills found that all those who reacted had a pre-existing sensitivity to a sugar that is present in the cell membranes of most mammals, but not in humans or other primates: galactose-alpha-1,3-galactose, or alpha-gal.

Alpha-gal is familiar to many scientists – its ability to trigger immune reactions is why organs taken from animals have never been transplanted successfully into people. The puzzle was why the drug recipients were sensitised and reacting to it.

The reactions appeared regional: patients in Arkansas, North Carolina and Tennessee experienced the hypersensitivity, but not those in Boston or northern California. Further research found that almost one in five people in one particular area of Tennessee had sensitivity to alpha-gal – it was not just limited to cancer patients in the trial.

What in rural Tennessee could trigger a reaction like this?

The team investigated parasites, moulds and diseases that occur only in pockets of the US. The answer arose from a second coincidence, when Dr Jacob Hosen, a researcher in Platts-Mills’ laboratory, stumbled across a map drawn by the Centers for Disease Control and Prevention (CDC) showing the prevalence of an infection called Rocky Mountain spotted fever (recently renamed spotted fever rickettsiosis).

It exactly overlapped the hot spots where the cetuximab reactions had occurred. Rocky Mountain spotted fever is transmitted by the bite of ticks, including Amblyomma americanum, one of the most common ticks in south-eastern US. It’s known as the lone star tick for a blotch of white on the back of the female’s body. The researchers wondered if the mystery reactions shared a footprint with a disease. And as ticks caused the disease, could ticks be linked to the reactions too? 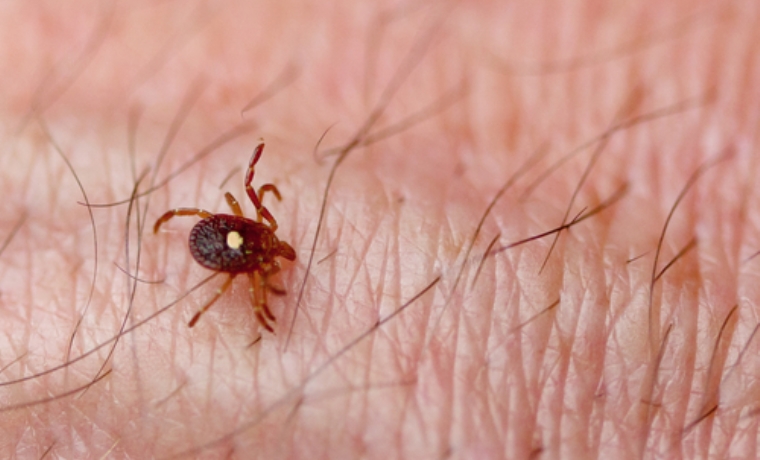 The lone star tick, Amblyomma americanum. It remains a mystery why its bite sensitizes people to alpha-gal, a sugar found in most mammalian (but not human) cells.

It was an intriguing hypothesis reinforced by a new set of patients who came into Platts-Mills’ clinic with meat allergies at about the same time. They were all adults, whereas allergies tend to show up in childhood. They had never had an allergic reaction before, but now they were experiencing allergy symptoms: swelling, hives and in the worst cases anaphylactic shock. They too had high levels of immunoglobin E (IgE) antibodies to alpha-gal.

Dr Scott Commins, a postgraduate Fellow in Platts-Mills’ group, took it upon himself to phone every new patient to ask whether they’d ever suffered a tick bite. “I think 94.6% of them answered affirmatively,” he says. “And the other few per cent would say: ‘You know, I’m outdoors all the time.’”

The connection was still speculative, and cementing cause and effect would take one final, extraordinary coincidence. One weekend Platts-Mills took off across the central Virginia hills, tramping through grassy underbrush. He came home five hours later, peeled off his boots and socks, and discovered his legs and feet were speckled with tiny dots that had burrowed into his skin and itched fiercely.

He saved a few and sent them to an entomologist. They were the larval form of lone star ticks.

He had his laboratory team draw his blood and check his IgE antibody levels. They were low to start with, and then week by week began to climb. Platts-Mills went to an event at the Royal Society of Medicine in London, where he ate two lamb chops and drank two glasses of wine. In the middle of the night he woke up covered in hives. 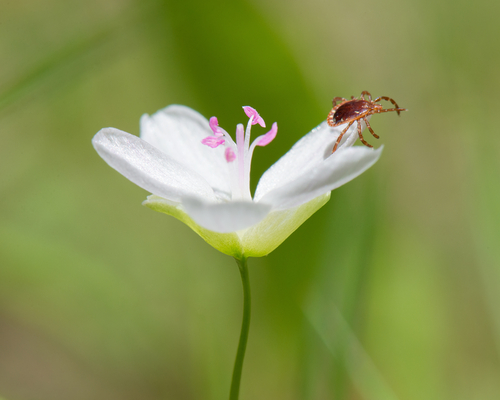 According to the CDC, tick-transmitted illnesses are 2.6 times more common in the US than mosquito-borne ones, yet mosquitoes receive the most public health attention and funding.

Scientists are not sure exactly what stage of the bite starts victims’ sensitisation. It is possible that a fragment of a previous blood meal from a mouse, bird or deer lingers in a tick’s guts and works its way up through its mouth and into its human victim. Or it is also possible that some still-unidentified compound in tick saliva is chemically close enough to alpha-gal to produce the same effect.

To make matters worse, however, the allergy isn’t only caused by the lone star tick. In 2007 Sheryl Van Nunen, a clinical associate professor at the University of Sydney School of Medicine, wrote up a description of 25 meat-allergic patients whose reactions she had confirmed with a skin-prick test. They were caused by bites from a different tick – Ixodes holocyclus, otherwise known as the Australian paralysis tick.

The allergy (sometimes known by other names such as mammalian meat allergy or delayed red meat allergy) was first named over a decade ago and Van Nunen saw her first patient 20 years before that. A laboratory test for the allergy has been on the market since 2010. However, alpha-gal allergy defies some of the bedrock tenets of immunology.

Food allergies are overwhelmingly caused by proteins, tend to surface in childhood and usually trigger symptoms quickly after a food is consumed. In contrast, alpha-gal is a sugar, alpha-gal patients tolerate meat for years before their reactions begin, and alpha-gal reactions take hours to occur.

However, alpha-gal reactions are definitely an allergy, given patients’ results on the same skin and IgE tests that immunologists use to determine allergies to other foods. That has led the researchers involved in studying alpha-gal to wonder whether the syndrome will help broaden the understanding of what constitutes an allergy response and lead to new concepts of how allergies are triggered.

Merritt, who estimates she has seen more than 500 patients with alpha-gal allergy, has it herself.

She is sensitive enough to react not only to meat, but to other products derived from mammal tissues – and, as she has discovered, they are threaded throughout modern life.

It’s not only sweaters, soaps and face creams. Medical products with an animal origin include the clotting drug heparin, derived from pig intestines and cow lung; pancreatic enzymes and thyroid supplements; medicines that include magnesium stearate as an inert filler; vaccines grown in certain cell lines; and other vaccines and intravenous fluids that contain gelatine.

It’s difficult to know how many people may be sensitised to alpha-gal without realising it.

A project at the National Institutes of Health (NIH) that studies unexplained occurrences of anaphylaxis found last year that 9% of the cases were actually alpha-gal patients whose sensitivity had never been diagnosed.

Investigation of alpha-gal in the US is caught in a bureaucratic quirk.

The CDC is responsible for infections spread by insects and arthropods, but alpha-gal syndrome is not an infection. That makes it the responsibility of the NIH, which has abundant laboratory scientists, but fewer shoe-leather disease detectives.

The NIH does seem to be taking an interest. In June 2018 it hosted an invitation-only one-day IgE-mediated Meat Allergy Workshop; in the past such meetings have indicated the giant agency is considering launching a research programme.

In August 2018, at the International Conference on Emerging Infectious Diseases, there was a talk on alpha-gal allergy. The CDC’s director of foodborne illness was in the audience, as was Dr Lyle Petersen, its director of vector-borne diseases, the department that deals with ticks. Afterwards they both zoomed up to ask questions. “I kind of had the impression this was just a weird, small thing,” said Petersen. “But this seems like kind of a big deal.”

With NIH and the CDC paying attention, research into alpha-gal might be reaching a threshold, a moment at which isolated investigations could coalesce into answers.

This is an edited excerpt from an article originally published by Maryn McKenna for Mosaic, which is funded by the Wellcome Trust, a global charitable foundation dedicated to improving health. All Mosaic’s articles can be found at mosaicscience.com and reproduced or distributed for free under a Creative Commons licence.