It’s 3am. I am sitting in a small rain shelter, attached to a fenced enclosure, on the Atlantic coast of Costa Rica. The rain from a tropical thunderstorm pours in and I am soaked to the skin. I am surrounded by 101 reconstructed sea turtle nests, all but one of which are from leatherback turtles, a species listed by the IUCN as critically endangered. The 101st and final nest is from a similarly threatened hawksbill turtle that nested early and out of season just a few nights ago.

Leatherback turtles nest all along this stretch of coast. They are threatened by people, who take the eggs, as well as by climate change and habitat destruction. The Costa Rican Government has responded by making the theft and sale of leatherback eggs illegal, but poaching remains a significant part of the problem – not least because the sale of other turtle species’ eggs remains legal, thus complicating enforcement. 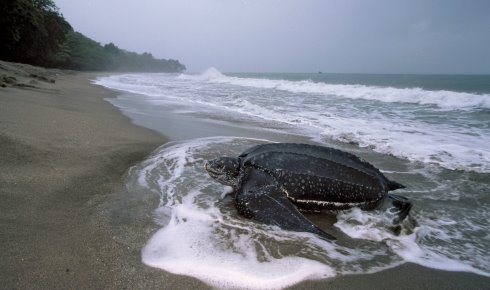 This turtle conservation project was set up by Latin American Sea Turtles (LAST), with scientists based here helped by volunteers such as me. The project is supported by Biosphere Expeditions, a European organisation providing opportunities for ‘citizen scientists’ to volunteer in scientific research. That is why a microbiologist from Wirral is on a wet beach in Costa Rica.

Opportunities for so-called ‘voluntourism’ have proliferated in recent years, not always with the best outcomes for the animals or local people. Concerns have been expressed, for example, regarding damaging contact with animals and the impact of tourists and volunteers on local economies and employment. It is vital that participants choose projects carefully (see 'What you need to know' below ). Until this project started, almost all turtle eggs on this stretch were taken by poachers or predators. The number of nests lost to poachers was reduced by 75% in 2017. LAST’s educational work in the community has enabled some former poachers to find employment on turtle conservation projects, a real boost to the long-term prospects of leatherback turtles in the region.

However, the problem persists. Just last night, 25 volunteers and scientists ventured out in small teams to patrol the beach. Only one turtle came to nest last night, but poachers got there first and all the eggs were taken. The only answer to this is to sweep the beach constantly for new nests. It’s one of the key roles of the volunteers and it’s a labour-intensive task. Patrols generally set out each night at approximately hourly intervals along the 7.1km coastal strip during nesting season (March to May for leatherbacks).

Each turtle may lay eggs up to eight times in a season, so most nights during this period some of these 300kg reptiles emerge from the sea, looking for a nesting place on the beach above the tideline. Some visits are aborted in favour of a return to the sea, but the turtles will then head for a different spot to find a nesting site. Pacuare beach is part of a complex of nesting beaches for leatherback turtles. This is the largest of the turtle species and the most migratory, which means nesting females can be found on the Caribbean coast in Costa Rica, Panama and Nicaragua. The geographical spread makes collecting information quite difficult.

Once a site is found, the turtle uses her rear flippers to dig a hole up to 80cm deep before depositing a mixture of eggs – firstly fertilised eggs and then smaller, yolkless eggs on the top. The yolkless eggs are thought to provide air space on top of the pile to allow the hatchlings to breathe.

The nest is dug into a boot shape, providing an antechamber to one side where many of the fertilised eggs are placed. The remaining eggs are placed on top. The nest is then backfilled with sand by the mother turtle before she attempts to camouflage the site by making tracks over a wide area. Nevertheless, nests left in situ are prone to both human poachers and natural predators such as crabs and racoons, as well as domestic dogs and even ants. There are also fungi and bacteria that infect the eggs, causing fatal developmental flaws. For all these reasons, LAST decided to recover all the eggs it can and relocate them to a secure hatchery, where the risk of poaching, predation and infection can be controlled. 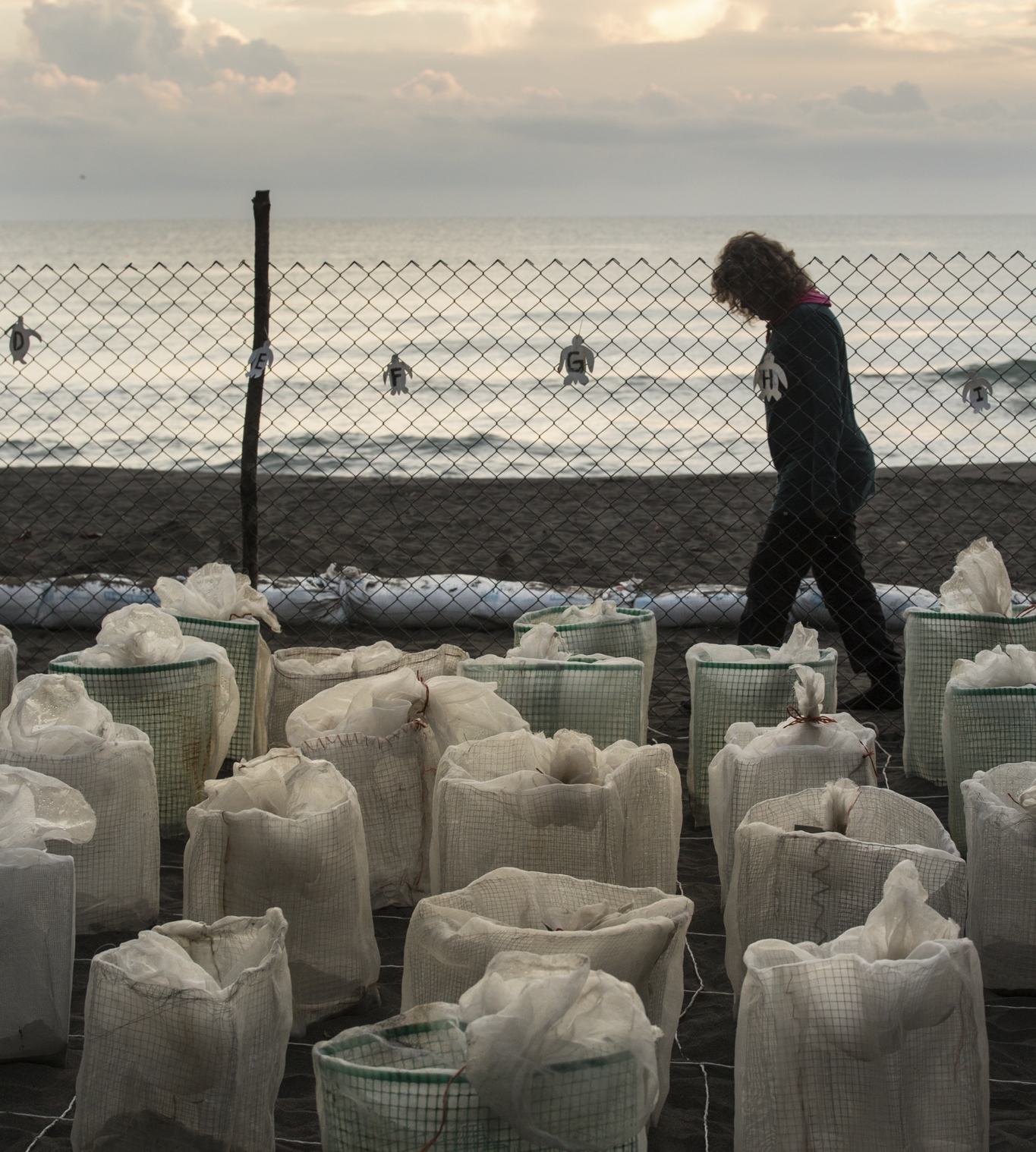 A volunteer with human-made nests at the secure hatchery. Image courtesy of Biosphere Expeditions.

The hatchery area is fenced with wire mesh and the sand is removed to a depth of one metre (approximately 100m³ of sand). The remaining hole is filled with fresh sand taken from the tideline. The fresh sand is sun-dried then sieved to remove shells and other debris, including crabs. The combination of seawater and sunlight reduces contaminant microbes and other pests. The process of creating this sand bed takes more than a month.

Locating the nesting turtles is no easy task when patrolling on a dark, black-sand beach at night. No white lights are permitted as turtles are very sensitive to light, so only a red light can be used. Poachers can often be distinguished by their indiscriminate use of white lights. Meanwhile, for volunteers, falling over obstacles such as logs and coconuts on the beach is common.

Once the turtle is located and the nest has been dug by the animal, its eggs can be caught using a sterile bag held discreetly under the animal’s rear. Leatherback turtles typically lay up to 100 viable eggs at each laying session, with additional yolkless eggs on top (they have been observed to lay up to 450 eggs in a season). Recovered eggs are taken to a hatchery and relaid in a human-made nest of a similar deep construction. Turtles are either tagged on the rear flippers and shoulder, or previous tag data is recorded and stays with the nest for further analysis and tracking.

Volunteer Safety
There have been attacks on conservationists and their volunteers in Costa Rica – including the much-publicised murder of a conservationist trying to protect turtle eggs. But thankfully this is rare, and at Pacuare beach the LAST team has reached a fairly easy truce with the poachers, based on ignoring each other. We never felt at risk - if the poachers get to a nesting turtle first, they are left to it and if we got there first, they left us alone. We were briefed at length on not confronting the poachers under any circumstances. The approach is helped by directly employing ex-poachers as part of the teams on the beach.

Turtles exhibit temperature-sensitive gender selection: warmer eggs produce predominantly female hatchlings and cooler eggs predominantly male (or ‘hot chicks, cool dudes’ as it was explained to us). So eggs cannot be held close to the body. Bags of eggs can weigh up to 8kg, so transport to the hatchery at arm’s length is a physical challenge and the load is shared between the group. Eggs are placed in the replacement nest in the same pattern as they were laid in the nest by the turtle. Fertilised eggs are put first in the toe of the boot with yolkless eggs at the top of the pile.

After incubation begins, it’s a waiting game. Nests typically incubate for 60 to 80 days before the hatchlings emerge and head for the sea. The hatchery is permanently staffed to protect the eggs from poachers, but also to enable scientists to get accurate data on the number of eggs hatched, and the gender and size of the hatchling. 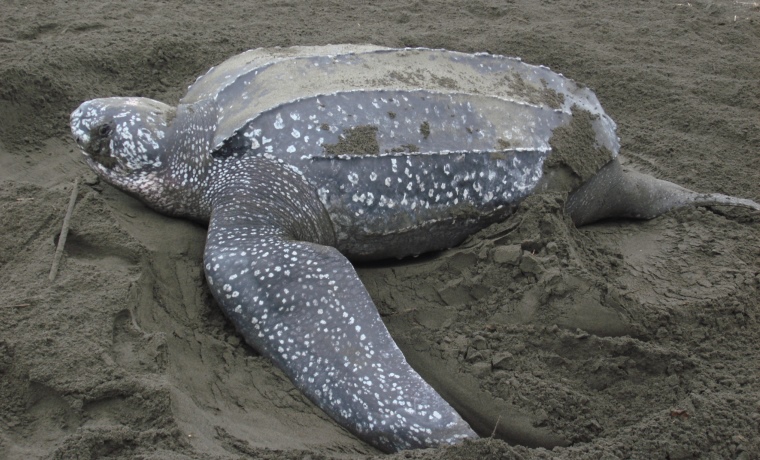 A leatherback laying eggs on the beach. Females can lay hundreds of viable eggs in a season, with many more yolkless eggs laid on top.

Nests are inspected every 15 minutes round the clock for evidence of hatchlings emerging, such as a ‘boiling water’ appearance at the surface. When this is seen, all volunteers are summoned to help and hatchlings are retrieved with gloved hands and placed in a bucket of sand cooled with refrigerated sea water. Newly emerged hatchlings have an energy burst that helps them get to the sea, but the cooling process delays this, enabling the scientists to measure them and collect data.

Once measured, hatchlings are placed on the sand and allowed to make it to sea unaided. Human contact is kept to a minimum. The crawl to the ocean enables the hatchling to store location and other data about their birth beach. Typically, 50–70% of fertilised eggs hatch, but it is estimated that only one in a thousand hatchlings released will survive the 15-year journey to adulthood.

So far in 2018, approximately 8,000 to 9,000 eggs have been retrieved, all but 150 being leatherback eggs. The annual total across all species is expected to be about 18-20,000. Of those, only single figures will reach maturity. The road to secure status for the leatherback turtle is going to be long and fraught, but projects like this help along the way.

Gary Hogben CBiol MRSB is a microbiologist and quality systems manager specialising in water treatment. He currently works for Feedwater Ltd managing a busy analytical laboratory. Gary has also advised the UK Department of Health and the UK Health and Safety Executive on Legionella control.

VOLUNTOURISM: WHAT YOU NEED KNOW
A panel* of tourism and conservation experts have devised ten tips for choosing a conservation tourism or volunteering project.
1. Reputation, reputation, reputation
Do your research: has the organisation won awards or accolades, who are they associated with, what is their philosophy, do they write & publish the results of their projects, and what’s their safety record?
2. Qualified staff
Ask who will be leading your group. Work should be led by qualified & proven experts, group leaders should also be well-qualified and all staff and volunteers should be well briefed on risks and safety issues.
3. Where does your money go?
Good organisations and reputable non-profit organisations will always publish clear information that shows how your money is spent.
4. Proper follow-up
A good organisation will, through updates and reports, keep you informed about how the project progresses even after you’ve left
5. What will you get out of it?
Be clear about what you want to get out of the experience – training, self-development, an adventure – then check whether the organisation is clear in communicating what’s on offer for you.
6. Community involvement and benefit
Understand a project’s relationship to the local community and make sure that the organisation is properly embedded with local efforts and people – does the community benefit, have they given consent for work to be carried out, how have they been involved? Are local people employed in the project? Do they provide training for locals, scholarships, capacity-building, education?
7. Your fellow participants
Understand the profile of the people that will share your trip by checking the organisation’s website and social media sites.
8. In the field
Check that the organisation is clear & transparent about what will be happening day to day, for example arrangements for accommodation, food and other logistics, and also what is expected of you.
9. Captive animals
If the experience involves captive animals, be very clear on the purpose of the captive facility, where the animals come from and whether it is part of a reputable programme.
10. Handling animals
Steer clear of organisations that encourage handling of captive wild animals for anything other than essential veterinary or neo-natal surrogate care. If wild animals are handled, it should only be for essential research & conservation work and following strict animal welfare guidelines.
(*The panel: Dr Matthias Hammer, founder of Biosphere Expeditions, Chris Wright, Senior Programmes Officer at the Born Free Foundation, Dr Angela Benson, Principal Lecturer in Tourism at the University of Brighton, Alex Tozer, Director of Operations for Operation Wallacea, and Tricia Barnett, Director of Tourism Concern).