A skilled zoologist and communicator, Arthur Milnes Marshall died in an accident in 1893, aged 41. His absorbing lectures offer a fascinating snapshot of the era’s biological knowledge, writes Martin Luck.

Portrait of Marshall (above) courtesy of The University of Manchester

It is highly unlikely that you’ve heard of Arthur Milnes Marshall (1852-1893). I’d not heard of him either until late in 2016 when I perused a forgotten bookcase in our departmental coffee room. It holds the personal library of the late John Hammond, a Cambridge animal physiologist best known for his work on artificial insemination. No one quite remembers why Sir John’s library ended up with us at the University of Nottingham, but there it is – a collection of obsolete textbooks and conference proceedings, plus some of his own lab notebooks.

I noticed a pair of dark red-bound volumes with rough-cut, water-stained pages and the name Marshall on the spine. I thought this might be  FHA Marshall, the Cambridge reproductive physiologist, but the books had nothing to do with him. They turned out to be a collection of 21 forgotten lectures by AMM (I’ll presume to call him that, for I feel I’ve come to know him quite well), collected by his brother Charles Frederic Marshall and published in 1894.

They proved to be an absorbing read. They deal with evolution, embryology, inheritance, colours and camouflage, recapitulation, and cell science, with the names of Charles Darwin, August Weismann, Anton Dohrn, Ernst Haeckel, Carl Ernst von Baer and a hundred other 19th century luminaries sprinkled throughout. They were delivered between 1879 and 1893 to student societies, public evening classes, the Manchester Microscopical Society and the British Association.

AMM was evidently a knowledgeable and insightful scientist, but also a gifted lecturer, capable of explaining the biology of his time to specialist and non-specialist audiences. I admire people who can present complex matters in straightforward language, so I was keen to find out more. Personal papers could not be traced, but public records and The University of Manchester archives reveal the essentials of his short but remarkably full life.

AMM was born in Birmingham, the second of five sons of a railway engineer. Prodigiously gifted and hard-working, he studied in Cambridge, London and Naples. He was a friend and contemporary of Francis Maitland Balfour and briefly lectured on his embryology course at Trinity College. Both men had studied under Michael Foster and took a strongly Darwinian view of the biological world in the tradition of Thomas Henry Huxley. AMM qualified in medicine, perhaps for want of other immediate openings, but instead of practising as a doctor attained the first chair in Zoology at Owens College, Manchester (later part of the Victoria University) at the age of only 27.

His courses were popular and his students loved him. He was a superb morphologist and draughtsman and used his own research, on the development of the cranial nerves and other organs in birds, elasmobranches and other species to enthuse his students. The Manchester Museum still holds the beautifully detailed lantern slides with which he illustrated his lectures. The clarity of his teaching and the elegant simplicity of his blackboard drawings became legendary. He seems to have possessed an engineer’s or architect’s ability to visualise structures in three dimensions and could transmit his image of animal development to his listeners. 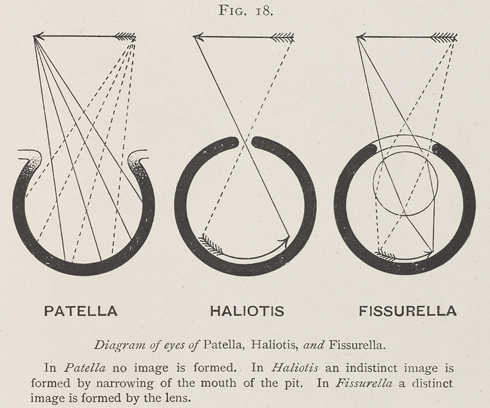 A diagram of the action of a lens from the collection of AMM's lectures, published in 1894.

He produced three textbooks (Practical Zoology, Vertebrate Embryology, and The Anatomy, Histology and Embryology of the Frog), which became standard works and went to several editions. He successfully commandeered funds from an Owens College benefactor, CF Beyer, to establish a laboratory adjacent to the College museum for which he also had responsibility. Papers in the Manchester archives reveal his efforts to obtain the latest microscopes, specimens and embryological models. He clearly had a flair for persuasive leadership, which the College authorities must have come to respect, if not to fear. At the same time, personal reports describe his compassion and generous encouragement of colleagues.

In addition to his academic work, he was a multi- talented and energetic athlete. He was prominent in College sports, at one point being president or vice- president of five student societies. He was in demand as a judge at athletics competitions and constantly lobbied the College for funds to improve grounds and facilities.

Outside the College, he embraced the growing university extension movement, in Manchester and other northern industrial towns, which contributed so much to working class public education in the context of Victorian social reform. There is no evidence of direct political activity, but with a little imagination it is easy to read a good deal of humanism and Fabian-style socialism in his character. 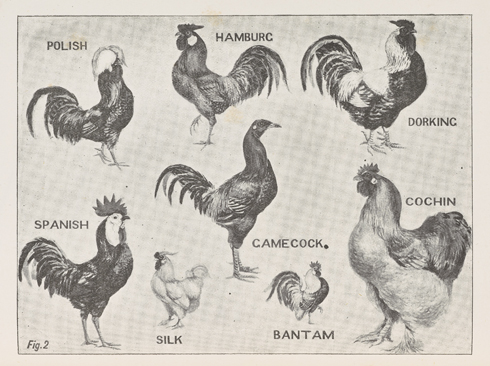 With this biographical background, what makes the two volumes of lectures so interesting? Sadly, but valuably for the  history of science, AMM died on the last day of 1893, aged 41, in a chance accident on Scafell in the English Lake District. He was an accomplished and careful mountaineer and Alpinist, so this was no climbing  accident (of the sort which claimed so many adventurous young men, including his 31-year-old friend Balfour 10 years earlier). Although inaccurate accounts of his death survive online to this day, his skull was crushed by a falling rock during a lunch break on the hillside with his climbing companions.

This misfortune means that AMM’s lectures, collected and published by his bereaved youngest brother, offer a time- stamped snapshot of the state of biology at the end of the 19th century. Indeed, had he not died when he did, they would have been overtaken by the science they describe and be of no interest at all.

We find, for example, that:

• evolution by natural selection was the established doctrine, but rates of species change were perplexing, the entities of trait transmission were obscure (Darwin’s gemmules wouldn’t work) and Lamarck was still causing controversy;

• the common ancestry of related organisms was acknowledged but missing links awaited liberation from the dead stones of palaeontology, including the newly discovered Archaeopteryx;

• embryology was suggesting recapitulation, but the story was frustrating and wouldn’t fit together;

• microscopy, with rapidly improving optics, was revealing cell organelles but their structural chemistry, and thus their likely function, remained opaque;

• mitosis and meiosis had been observed but not understood;

• the language of biology was managing to avoid creationist overtones but frequently lapsed into teleology.

Plus, of course, molecular science was decades away. Most revealing, perhaps, is the complete absence of Gregor Mendel’s name from the lectures. Mendel’s experiments were performed in the mid- 1800s but famously overlooked until the start of the 20th century. AMM certainly knew nothing of them. It is hard for us now to contemplate biology without invoking chromosomes, genes and DNA, but that was the position. Weismann had come close to understanding the principles of inheritance but remained perplexed by the mechanism. It took Mendel’s insight and the experiments of a new generation of biologists to make sense of everything. 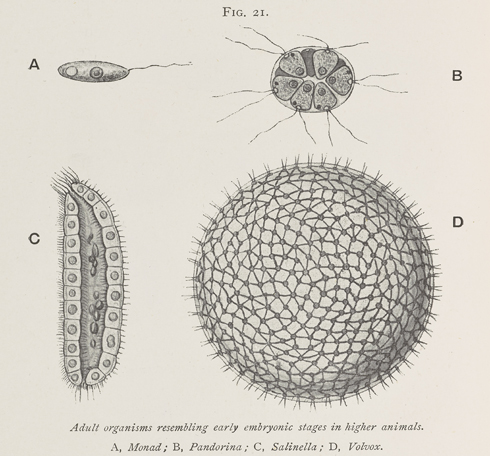 A diagram of Volvox, an adult algal organism supposedly resembling the embryonic
stages of higher animals

AMM had a knack of facing these controversial issues head-on. In describing the latest theories to his audience, his style was to take the prevailing orthodoxy as far as it would go but then explain how observations from the laboratory and the natural world raised difficulties and discrepancies in need of a better paradigm.

As a marvelously skillful teacher, he could lead his audience through challenging and controversial material using lively images and accessible examples. It is not surprising that his lectures were well attended. In a series of outreach presentations to the Ancoats Society, which make up most of the second volume of lectures, he explains Darwin’s great theory to his inexpert audience. He then proceeds to demolish, one- by-one and with good humour, the main counter-arguments of the day (involving eyes, fossil records, vestigial organs and such like). But Darwin himself comes in for respectful criticism where his ideas fail to convince.

The final lecture is a biographical eulogy to Darwin, including a description of his methods of study, his exhaustive experiments with plants and animals, and his prodigious output in the face of ill health. It includes a charmingly balanced summary of his gentlemen’s agreement with Alfred Russel Wallace over precedence for their joint explanation of evolution, and AMM’s deep admiration for Darwin shines through. The final words acknowledge “his contribution to human knowledge, his love for truthfulness and the gentle courtesy of his life”.

The astonishing readability of these two volumes of lectures, and their illumination of a crucial time in the history of biology, demanded that they be brought to life once again [see references for my book on Marshall's lectures]. Reading them today,  we sense the transformative effect of Darwin’s insight, the excitement of discovery and exactly how far our science has come in 125 years. Had AMM continued his life and work into the next century, he would surely have grasped the new biology and eagerly communicated its wonders to students and public alike.

Marshall’s name deserves to be better known. Above all, it should find a place among those of the great biologists upon whose work he drew. Science would be nothing without inspired interpreters and gifted teachers.

Martin Luck FRSB is emeritus professor of physiological education at the School of Biosciences, University of Nottingham.