Who was... Kathleen Carpenter?

Catherine Duigan explores the life and times of Dr Kathleen Carpenter (1891–1970), a pioneering scientist known as 'the mother of freshwater ecology'

Photos of Kathleen courtesy of the Aberystwyth University Archives.

Kathleen Edithe Zimmermann was born on March 24 1891 in Gainsborough, Lincolnshire. Her mother was Victoria Boor from Cambridgeshire, while her father, Francis Frederick Zimmermann, was born in Germany. They had one son and five daughters.

Francis Zimmermann was a successful businessman and expert in international markets, and in his obituary his youngest child, Kathleen, was described as "perhaps the most remarkable daughter". Fortunately, he believed in education for his daughters and Kathleen is associated with some of the most progressive universities, starting with University College of Wales (UCW) Aberystwyth in September 1907.

In its founding charter, Aberystwyth specified equal access to degrees and was one of the first universities to provide all-female accommodation. Kathleen was awarded a BSc in 1910 and remained there to continue postgraduate studies.

In the 1911 census of Alexandra Hall, Kathleen is listed as an 'inmate' alongside women drawn mainly from England and Wales. Kathleen would have studied and worked in Old College and walked the length of the Prom every day.

She began comprehensive British freshwater biology investigations at Aberystwyth. Her seminal studies focused on the environmental impact of metal pollution on Cardiganshire streams.

Lead and zinc have been mined in Cardiganshire since the reign of Elizabeth I, and links were quickly made between mine waste water and ecological damage. Following a flood, cattle died after eating contaminated grass in the Ystwyth valley, while the 1861 Salmon Fisheries Enquiry reported "a total extinction of animal life" in the rivers Rheidol and Ystwyth. 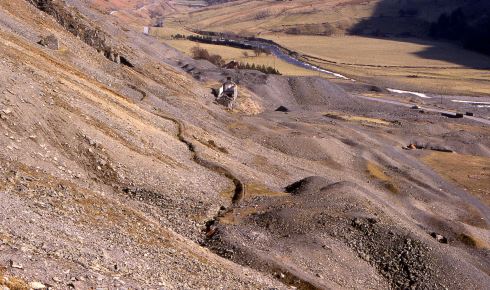 Metal and coal mining has had enormous environmental impact in Wales.

The National Library of Wales holds two fragile folders of Kathleen's type-written examination papers, including a letter that refers to an £8 cheque to cover the MSc fee. The PhD folder has a hand-drawn, watercoloured map of her study area, which focused on rivers around Aberystwyth, but extended to the relatively unpolluted rivers Teifi and Dyfi. It shows that she covered a relatively large area at a time when cars were starting to become common.

Her sampling protocol demonstrated a meticulous approach, collecting organisms from under stones and in sediment, scraped from vegetation and from the water surface. In this way, she produced the first detailed assessment of British running water fauna, including dividing the comprehensive species lists into ecological types. Due to changes in the economic viability of local mines, she was able to study the biological impact of the commencement of mining and the recovery after closure.

In studies in the headwaters of the Teifi, she discovered that within a year of a mine recommencing activities in 1924, the mollusc Ancylus fluviatilis and Trichoptera larvae had disappeared. She also demonstrated experimentally the toxic effects of metallic salts on minnows, trout and sticklebacks, finding that colloidal precipitate of heavy metal formed on the gills, causing death by suffocation.

In 1914, there were almost 9,000 troops in and around Aberystwyth, plus refugees and convalescing soldiers. In one incident, a mob ran a German lecturer out of town. At this time of growing community tensions, Kathleen decided to change her name from Zimmermann to Carpenter (the English translation of the German word). However, she must have also recognised the opportunities opening up to women: during World War I, women students were in the majority at Aberystwyth, leading to the accusation of "petticoat government" of college committees.

Kathleen sailed across the Atlantic several times to Quebec, Montreal and New York. Travel records reveal she was single, 5 feet 5 inches tall, had brown eyes and was in good health. After submitting her MSc in 1923, Kathleen attended the Association of the Advancement of Science Conference in Toronto. The ship's passenger list read like a Who's Who of eminent male scientists.

By 1927, her scientific reputation was secure, as a conference press report stated "Zoology has an eminent sponsor in Dr Kathleen Carpenter" and referred to the use of her research by a river pollution committee. Her subsequent paper in Nature recorded Ice Age relic species in British streams.

Her textbook Life in Inland Waters (dedicated to her father) was published in 1928. This first freshwater ecology textbook in English is informed with illustrations, data and inferences made from Welsh waters, and has a high dependence on European and American scientific literature. The book was commissioned by British evolutionary biologist Julian Huxley because freshwater biology was considered neglected and eclipsed by marine biology.

Kathleen's passion for freshwater ecosystems sings from the poetic description of freshwater life in the author's preface. She writes "it is a world of infinite beauty, infinite variety, infinite charm; a world, too, which lies freely open for our exploration, and yet how many, even of professed biologists, have penetrated beyond its threshold." The book contains more than 90 line drawings of invertebrates, which presumably she enjoyed drawing herself.

The publication of her textbook opened a door for her to work in the US, starting with Illinois State University, where she carried out further research on metal toxicity in fish. Here, she was a guest of honour at a meeting of the American Association of University Women, taking tea and talking about British universities.

Her next position was at Radcliffe College, which was developed for the education of women who had been trying to gain access to Harvard. In a presidential report from 1929–1930, Ada Comstock talked about the growing importance of the graduate school with the list of students coming from abroad, including Kathleen, growing more impressive: "... each of them, though they are all comparatively young women, has made herself widely known as a productive scholar in her field...the pride of a graduate school."

Kathleen's first teaching appointment was at Washington College, Maryland, on Chesapeake Bay, a classic American liberal arts college. At this time, she was a member of the Sigma Delta Epsilon Society, now known as Graduate Women in Science. Clearly appreciated by her students, she was also elected by undergraduate students to the scholastic Honor Society.

World War II overshadows Kathleen's final contributions. In the mid-1930s, she returned to the UK to work at Liverpool University, where she carried out one of the first detailed studies of the diet of young salmon in the River Dee. At a conference in 1939, she referred to a recently spent male salmon parr that had eaten eggs likely to be his offspring, which generated newspaper headlines about "cannibal salmon", alongside reports of increasing political tensions.

The only known personal description of Kathleen came from a book by war correspondent Michael Moynihan. She leaps out of the first line: "Kathleen Carpenter came unexpectedly to tea the Sunday war was declared." He went on to describe a formidable character with thick-lensed glasses, prone to making personal remarks, but also pausing conversation to listen to a blackbird singing.

"It was the study of freshwater fish that kept her from despair," he wrote.

In 1944, Professor Lily Newton at Aberystwyth carried out a review of the mine pollution of the rivers of West Wales. In it, she states the review was produced from various scattered sources and that records of the previous 20 years of research were destroyed by enemy action. There is no evidence of Kathleen's involvement, suggesting her scientific career ended abruptly during World War II. She died in Cheltenham in 1970, leaving only a few thousand pounds.

Kathleen's groundbreaking work on pollution is still highly relevant in the context of natural resource management in Wales, but our appreciation of this mine legacy is more complex. 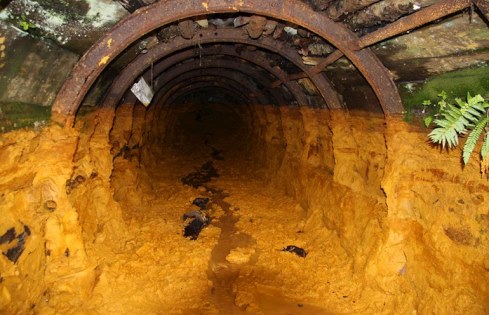 There are 1,300 abandoned metal mines in Wales that have been estimated to impact more than 200km of river

Abandoned metal mines support Calaminarian grassland of European conservation importance, including plants, mosses, liverworts and lichens that have evolved to grow on contaminated soil – a genetic resource for bioremediation and bio-mining. Today, 1,300 mines impact over 200km of rivers in Wales. Nine of the 10 catchments most polluted by abandoned mines in the UK are in Wales. Recent research revealed that in 2012 contaminated silage led to cattle mortality and the remobilisation of metallic sediments is likely to increase during extreme weather events.

Life in Inland Waters concludes with an analysis of the importance of fresh water for human society and the impact of environmental pressures traced back to the Industrial Revolution. As a consequence, the longevity of the mine pollution legacy in Wales would be understood by Kathleen today.

Her research has also contributed to the key conservation ideas and science developed during the last century, including using chemistry and biology to assess water quality. Before ecosystem services thinking, she justified the importance of fresh waters in a socioeconomic context. At the same time, she acknowledged that nature is important in its own right – to be enjoyed and protected. Intuitively, she knew interactions with nature were important for "health and a quiet mind".

Finally, her research demonstrated the resilience of Welsh rivers: they can recover from pollution. Above all, she was an absolute champion of a scientific approach to environmental management. 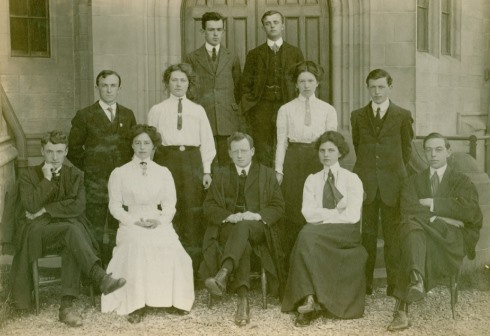 Researching the life of Kathleen Carpenter began as a historical research project with my husband, Dr Warren Kovach. An invitation to give a presentation on International Women's Day (IWD) made me think about the specific challenges she would have faced as an early woman scientist. Kathleen was fortunate to live at a time when educational opportunities, social change and the evolution of women's clothing made it possible to undertake scientific fieldwork.

However, she also faced other gender parity challenges that are directly related to the IWD 2018 theme #PressForProgress, including progressing in academia. The clothing issue still has resonance today – personal protective wear needs to be specifically designed for women, as discomfort in the field will reduce productivity. In addition, there are still parts of the world where women have to be covered to conform to social expectations.

Kathleen was passionate about science and this characteristic was part of her approach to communication. From an early stage, she was an active member of scientific societies and organisations supporting the advancement of women in science. She travelled, took risks, spoke several languages and was a devoted teacher appreciated by her students.

Without doubt, her career can be considered an important part of the collective efforts of women to make progress in the biosciences. To tell the story of one of my sister freshwater biologists has become a labour of love and a welcome obligation[1].

Catherine Duigan FRSB leads the Evidence Analysis Group at Natural Resources Wales. After postdoctoral research on lakes in the High Atlas Mountains, she developed the current classification of British lakes, which is used in conservation assessments. She co-wrote and edited The Rivers of Wales.