As well as being ubiquitous on land, nematodes are the most abundant multicellular animals on the ocean floor and can teach us a lot about marine environments, explains Laetitia Gunton

"If all the matter in the universe except the nematodes were swept away, our world would still be dimly recognisable ... we should find its mountains, hills, vales, rivers, lakes, and oceans represented by a film of nematodes. The location of towns would be decipherable, since for every massing of human beings, there would be a corresponding massing of certain nematodes. Trees would still stand in ghostly rows representing our streets and highways."

This quote from 1915 by Nathan A Cobb, the father of American nematology, describes the tremendous ubiquity of nematodes on our planet. They are found nearly everywhere, both on land and in the sea. They have colonised the sediments on sandy beaches, right down to deep-sea trenches thousands of metres below the surface of the waves.

The word 'nematode' is derived from the Greek, 'nema' meaning 'thread' and 'odes' meaning 'resembling'. Indeed, to the naked eye many nematodes look like threads of fabric pulled from a knitted jumper. Despite having generally very similar basic body plans (a tube within a tube), nematodes can range in size from 80 μm (0.08mm) to 8 metres long. The largest known nematode, Placentonema gigantissima, is reported to reach sizes of up to 8.4m long and 2.5cm wide. This gigantic worm was found living as a parasite in the reproductive tract and placenta of a sperm whale.

Marine nematodes are thought to be the most diverse and widespread group of nematodes and are the most abundant multicellular organisms in the deep oceans. They play a vital role in the marine trophic food web, are involved in nutrient release and cycling and act as a source of food for many larger animals.

As decomposers, they help break down dead organic matter and as they burrow beneath the surface of the ocean floor they introduce oxygen into sediments, a process known as bioturbation.

Free-living marine nematodes can be used as bioindicators to help us understand the effect of both natural and anthropogenic disturbance on marine communities. 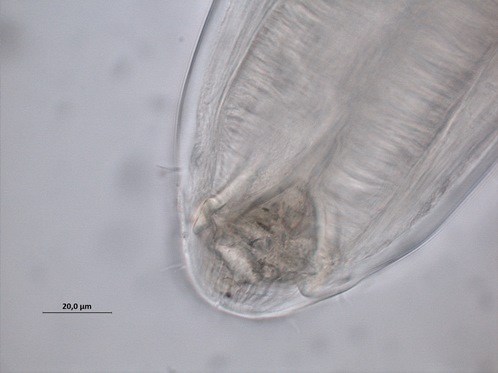 Nematodes are particularly good indicators for a number of reasons. First, they are very numerous in almost all marine sediments (often hundreds of thousands of individuals per square metre). They also have short life cycles and high population stability, and are able to survive in extreme conditions. They live in sediments and are unlikely to travel large distances in their lifetimes, yet they react quickly to environmental change.

We can investigate how nematodes react to environmental change by monitoring characteristics of populations, such as the abundance, biomass, species composition and diversity of nematodes present in a given area. It is also useful to investigate their 'functional traits' – that is, the characteristics of an organism that relate to its response to the environment and/or ecosystem functioning. Examples of functional traits include body size, longevity, reproductive method, feeding group and motility method.

As mentioned earlier, nematodes are useful indicators of change in the marine environment – whether this is physical disturbance, such as the action of currents scouring the seabed or from chemical pollution leaching out from a factory outlet pipe. Laboratory experiments have shown that nematode communities exposed to metal contaminants such as zinc and copper undergo changes in their species composition[1].

Thick skinned
A nematode's cuticle is the key to its success and ability to live in almost any environment. The cuticle, which is composed predominantly of collagen, surrounds the body of a nematode and reduces the permeability of the body wall, protecting the worm from hostile conditions outside. In this way, nematodes can thrive in harsh environments, such as dry soils or the inside of animals' digestive tracts. One extremely hardy nematode, Halicephalobus mephisto, was found burrowing around 1.3km deep in a South African gold mine[12].

Different species of the nematode community react differently to different contaminants. In a study off the eastern coast of Italy, in the Central Adriatic Sea, sites near rivers with increased levels of eutrophication had higher abundances of certain nematode genera[2].

Nematodes respond to oil spills very rapidly. During the Agip Abruzzo oil spill on the north-east coast of Italy, 2,000 tonnes of crude oil were released into the sea[3]. Shortly after the spill, the abundance of nematodes declined and the functional characteristics of the nematode assemblage shifted, with fewer non-selective deposit feeders found at the oil spill site. During another spill, from the Amoco Cadiz, 1.6 million barrels were released off the north coast of France, resulting in a reduction in the number of nematodes that was still evident two years later[4].

In the Deepwater Horizon accident, 4.6 million barrels of oil were released into the Gulf of Mexico. Around 35% of the resulting oil was trapped in deep-sea plumes and carried down into deepwater sediments. Two months after the oil stopped flowing, samples revealed that nematode communities were affected over an area of 148km2[5]. Sadly, the recent film of the incident, starring Mark Wahlberg and Kurt Russell, seems to have neglected to mention the effect on nematodes.

In physically disturbed marine environments, such as underwater canyons (which create strong upswells of water), there is a lower abundance of nematodes and a distinct community composition[6,7]. At three sites across the UK where material from dredging has been dumped, the same two dominant nematode species were found at each of the sites, despite the difference in location, environmental conditions and type of dredged material[8].

After physical disturbance, populations can be very slow to return to their original state. More than 25 years since mining at a site on the seabed of the Tropical Eastern Pacific, the nematode community still had not returned to how it was before the disturbance[9]. In this way, nematodes can be used to detect disturbances even years after the event.

By 2100, the average global temperature is predicted to rise by 0.5°F–8.6°F and, with this, sea temperatures will also rise[10]. Increases in ocean temperature are likely to modify the circulation of water around the oceans and the formation of cold oxygenated deep water.

Warming also decreases the oxygen solubility of the seas and increases stratification, decreasing vertical mixing of oxygenated water. All these factors will contribute to an increase in oxygen minimum zones (OMZs), areas where oxygen is less than 0.5 ml l-1. Few organisms are able to tolerate such low levels of oxygen except nematodes, which can be found in high abundances at these sites, making them good organisms for monitoring OMZs.

Nematodes are perhaps the most successful metazoan group on Earth – their simple yet effective body form enables them to inhabit practically every environment on the planet. Because of this, they are excellent organisms for tracking environmental change. By monitoring their changes in community composition and functional groups, we can predict how the oceans will respond to global warming and increased anthropogenic disturbance.

So now we can add another level of detail to Cobb's original 1915 description of the ubiquity of nematodes. Not only would we be able to distinguish species of animals and rows of trees by the nematodes present, but the types of nematode inhabiting an area can tell us information such as where the seabed was disturbed by currents or trawling, how far an oil spill spread, and even when and where the ocean temperature changed.

At first glance under a microscope, it can be difficult to distinguish a nematode's head from its tail. However, a more careful inspection reveals that nematodes have surprisingly complicated mouthparts, and their transparent body means it is possible to see internal features without the need for dissection. 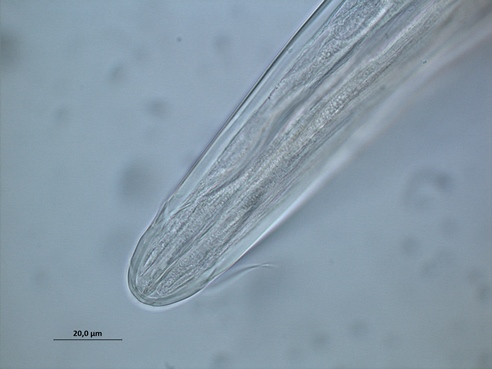 Free-living, aquatic nematodes can be divided into groups based on their buccal (mouth) morphology, the reasoning being that their feeding apparatus is likely to relate to what they eat and so where they are positioned in the food chain. As such, nematodes are divided into four feeding groups: selective deposit feeders, non-selective deposit feeders, epistrate feeders (Fig 1: Phanodermopsis) and omnivores/predators.

Both deposit and epistrate feeders consume bacteria and unicellular eukaryotes. Deposit feeders eat the food whole, while epistrate feeders puncture the cell membrane and suck out the cell contents, similar to drinking from a juice carton with a straw. Finally, the predators/omnivores have large jaws (Fig 2: Cylicolaimus sp.) to feed on smaller nematodes, oligochaetes, polychaetes and other smaller fauna.

Nematodes can also be divided into functional groups according to their tail shape: rounded, clavate-conicocylindrical, conical or long. They use their tails to squirm though interstitial spaces in the sediment, pushing the sides of their bodies against sediment grains. 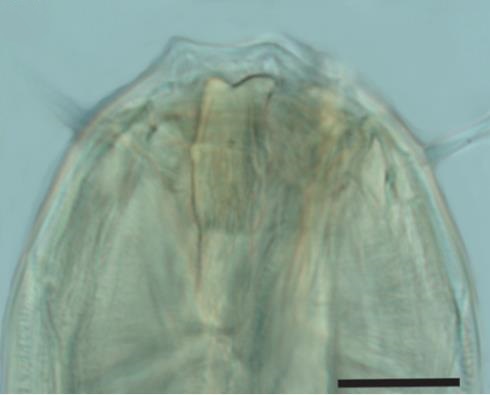 Their tails are also used for anchorage – individuals with long tails have been observed to anchor the tip of their tail on to sediment particles with mucus from a gland at the end of the tail, enabling them to move forward by extending their tail and also quickly retract by recoiling the tail. It is thought long-tailed nematodes are more abundant in high-energy and disturbed marine environments, although the reasons for this remain unclear.

Dr Laetitia Gunton has a PhD in deep-sea marine ecology from the University of Southampton and the Natural History Museum, London. She currently works in academic publishing at the Institution of Engineering and Technology.