In December 2014, amateur fossil hunter Jonathan Bow made an astonishing discovery on the south Wales shoreline. He unearthed the first complete skeleton of a carnivorous marine reptile in Wales. The ichthyosaur (commonly termed 'fish lizard') measured a whopping 2.13m and weighed in at 60kg. The find made national news and the National Museum of Wales described it as "a potentially very, very important find" given its completeness.

Fossils are the remains or impressions made by prehistoric plants or animals, created when bones, shells or traces of indentation are embedded in rock and preserved. Fossils usually form when remains are buried quickly, limiting damage from decay. Fossilisation, in most cases, occurs when the remains are preserved in sediments underwater and are gradually washed up after being untouched for millions of years. This is why fossils are often, but not exclusively, found around coastal areas.

For beginners, going out with an organised group or more experienced fossil hunter is recommended, as is an identification booklet. Lomax says effective fossil hunting is about having a keen eye for the unusual. "Think outside the box. Fossils are not always found complete, all of the rock removed and in perfect condition. Usually the remains are entombed in rock, with only fragments poking out. Remember that your most important tool, above everything, is your eyes."

If something looks unusual or odd, the chances are it probably is, says Lomax. "So collect it. It's how we learn."

A good (and safe) place to search is among the shingle and exposed foreshore at low tide. During a falling tide, fossils are deposited between the high and low water mark, ready to be found by eye. As waves and shingle scour the foreshore, rock is also weathered away, leaving harder fossil remains protruding from the surface. According to Roy Shepherd at fossil hunting website discoveringfossils.co.uk, some spectacular discoveries have been made along the foreshores of the British Isles, including complete marine reptile skeletons and giant ammonites measuring up to 1.83m across. 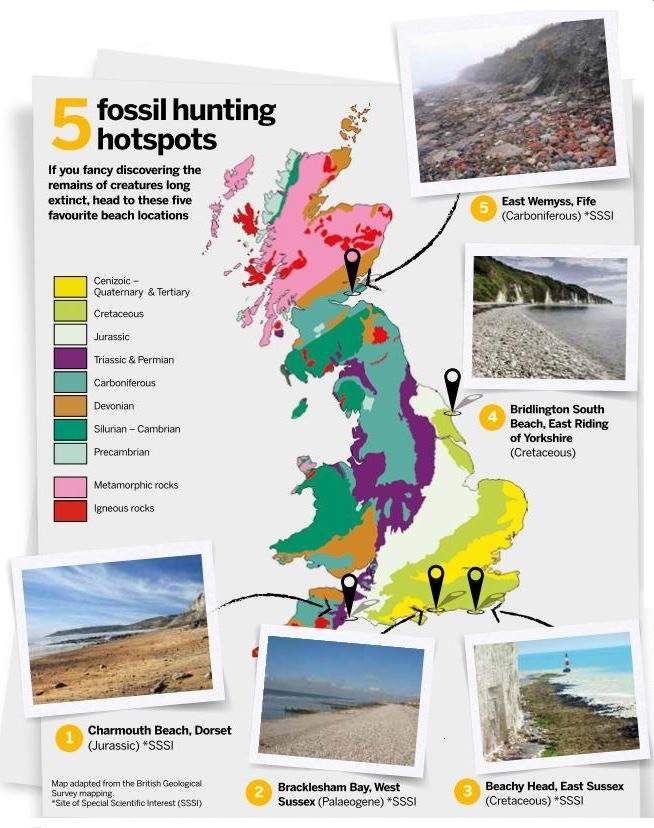 Freshly exposed fossils can also be found on the backshore, where fallen boulders and rocks lie scattered across the beach. It's important to remain at least 10m or so from the cliff, as rocks can fall at any time – more serious fossil collection on or below cliffs requires a hard hat and an experienced guide. Do not hit rocks unnecessarily and never hack away at cliffs.

Many people associate fossils with the Jurassic period and ammonites, the spiral marine invertebrates that lived between 400 and 66 million years ago. For less common finds, identifying fossils or fossil fragments is a skill many palaeontologists develop through first hand discoveries and years of field work. However, that's not to say that a decent identification booklet and accurate recording of findings by amateurs aren't equally valid in some cases.

Make a note of where the fossil was found and in which type of rock. These are two vital pieces of information should you wish to get a professional to help identify your specimen.

Many museums offer fossil identification services. London's Natural History Museum, for example, has a drop-in service on weekdays or the first Saturday of the month, but its experts will also do their best to identify specimens from a photo uploaded to the fossils and rocks section of its website (www.nhm.ac.uk/natureplus/community/identification/fossils-rocks).

Experienced researchers may be able to name a fossil immediately without further examination, but incomplete specimens and decay to key parts of the fossil can make it more difficult to be certain.

The work of Sir Richard Owen, founder of the Natural History Museum, has left its mark on modern palaeontology. Owen not only coined the term 'dinosaur' (meaning 'terrible lizard'), but described many new creatures and played a huge part in our fascination for the discovery and display of fossils.

Mary Anning is another major influence on our understanding of ancient creatures. She made some incredibly significant geological finds on the Dorset coast. Her discoveries include the first two plesiosaur skeletons found and the first correctly identified ichthyosaur skeleton. Despite these finds, Anning struggled financially for most of her life, operating independently from the largely male British scientific establishment.

However, in recognition of her contribution to science, the species pictured above was named after her. Many people also attempt to follow in her footsteps to this day by visiting the beaches of Lyme Regis.

One way to identify fossils is through comparison. Existing collections of fossils that have already been identified provide an alternative to expensive and potentially damaging radioactive dating methods.

There are no set rules as to how fossils should be preserved by the public, and experts often disagree over the best course of action. This said, the way in which we expose and treat fossils after discovery will determine how well they can be preserved.

Whatever we do with our fossils, says Shepherd, we must remember to be respectful towards anything we find. He says: "Being respectful to the landscape is important and we must preserve our findings so that others can enjoy them too.

"I always use the analogy of discovering the remains of a Roman mosaic in your garden. You wouldn't chip away at it causing damage – so our attitude towards fossils should be the same. They are part of our history and we must look after them." 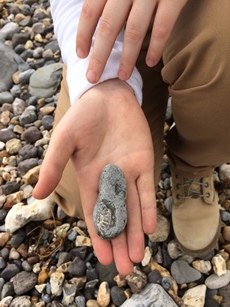 Wear suitable clothing and footwear, and be vigilant at all times for falling rocks or obstructions.

Check the tide times so that you don't get stuck out at sea and don't chip away at the cliff edge.

Read up about the area you are visiting so that you are familiar with the layout and are aware of any restrictions for removing fossils. Take a map to help you navigate.

Be patient when looking for fossils and don't get disheartened if you don't find anything on your first trip. Fossils can be found in all sorts of areas on a beach so you have to look closely and spend time turning over as many rocks as you can.

If you are fossil hunting in a Site of Special Scientific Interest, check whether you are allowed to remove fossils and other specimens, as it is sometimes illegal to do so.

Grace Paget is a science writer and media assistant for the Cystic Fibrosis Trust.